Viral: Twitter Found 1991 Clip Of Will Smith Joking About A Bald Man

"The bass player? He got a rule. He got to wax his head every morning," says young Will Smith in the clip 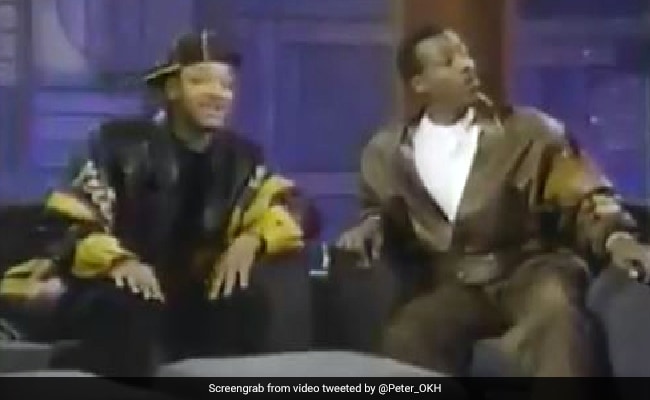 A joke Will Smith made about a bald man in 1991 has gone viral after the Oscars Slapgate. For those who don't know (and is there anyone who doesn't?), presenter Chris Rock made fun of Will's wife Jada Pinkett's shorn head, comparing it to the GI Jane character played by Demi Moore in a 90s film in which she has a buzzcut. While Will laughed at first, he was triggered moments later – perhaps by Jada's eyeroll – and stormed up to Chris, hit him and then yelled, "Keep my wife's name out of your f*****g mouth."

Amid almost unanimous condemnation of Will Smith's actions, Twitter has resurrected – and is trending – a clip from an appearance the King Richard star made on The Arsenio Hall Show in 1991. Will was The Fresh Price Of Bel-Air at the time and proceeded to get too fresh with the in-house band's bassist who was bald.

"The bass player? He got a rule. He got to wax his head every morning. That's a rule! He follows the rules, man. He follows the rules," Will Smith says in the clip – the camera cuts to the bassist, John B Williams, who smiles in response. As the camera cuts back to Will, someone – either Arsenio or the audience – calls him "rude"; "These are jokes, come one," Will responds.

“He gotta wax his head every morning.” Now this is a video of Will Smith saying a joke about someone with Alopecia.

One reason I love the internet, it never forgets. pic.twitter.com/4OGlgSrcjA

RollingStone reached out to John B Williams, a double-bassist and bass guitarist of renown. "I didn't take it seriously. He was a comedian. He was the Fresh Prince of Bel-Air. He was a rapper. I took it as a joke. I laughed it off," Mr Williams said. He also explained that while the two jokes – Will  Smith's at the expense of himself and Chris Rock's at the expense of Jada Pinkett's – were similar in subject, Mr Williams' baldness is not caused by alopecia while Jada's is.

John B Williams also told RollingStone that Will Smith lost his temper because the joke was on his wife rather than him. When Chris first made the comment, Will was laughing. It wasn't until it became obvious Jada didn't think it was funny that Will went to her defence. Love makes you do all kinds of things. That's his wife, who he loves. He just reacted from outrage. I have sometimes reacted from outrage," he said.

Will Smith himself offered the same excuse, first in his tearful Best Actor Oscar acceptance speech – "Love will make you do crazy things" – and then in an Instagram post in which he apologized to Chris Rock by name and also wrote: "Jokes at my expense are a part of the job, but a joke about Jada's medical condition was too much for me to bear and I reacted emotionally.

Regardless of Will Smith's intentions and apologies, there may be a reckoning in store. The Academy, which tweeted after the Oscars that it does not "condone violence of any form," is conducting an investigation and will decide on whether this year's Best Actor should face consequences. Chris Rock, who kept calm and carried on presenting the award he was there to present, declined to file a police report and has not so far commented publicly.

"Hollywood Is Just Spineless": Jim Carrey, Straight-Up On The Will Smith Slap