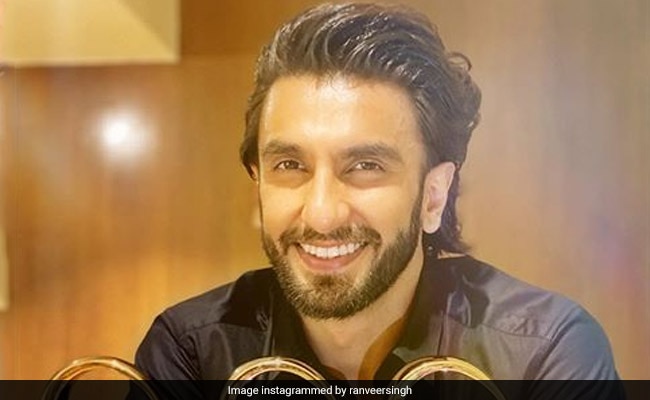 The weekend started on a great note for Ranveer Singh! The 34-year-old actor won big at the Zee Cine Awards held in Mumbai last night and had to had to share a happy pic on Instagram. Ranveer summed up his three wins in the caption as he wrote: "Best Actor in a Leading Role, Song of the Year, Best On-screen Pair. Zee Cine Awards. Blessings on Blessings on Blessings." Now, Deepika made a brief appearance on Ranveer's Instagram for some adorable social media PDA and she stated the obvious. "Hi, you are so handsome! Okay bye," she wrote. Aww... how cute is that?

Ranveer Singh, known for his flamboyant sense of sartorial choices, took men's fashion a notch higher with his colourful blazer from the studios of Versace. Handsome indeed! Check out Ranveer's post and Deepika's comment here. 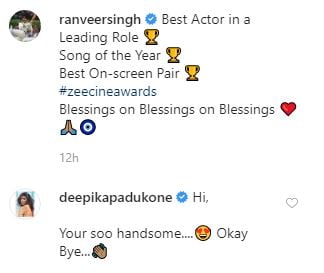 Ranveer Singh's Gully Boy, also starring Alia Bhatt, made records with its big wins at this year's awards season. Ranveer won the Best Actor trophy at the Filmfare Awards earlier this year, where Deepika was missing in actor. Later on his Instagram, Ranveer revealed how Deepika reacted when he brought back home the trophy. "When my little lady met my black lady," read the caption on Ranveer's post.

When my Little lady met my Black lady @deepikapadukone

Meanwhile at the Zee Cine Awards, more wins were in line for Team Gully Boy. Siddhant Chaturvedi won the Best Debut (Male) trophy while Ananya Panday won the Best Female Debut for Student Of The Year 2. Taapsee Pannu won the Best Actress Award for her performance in Badla while Kartik Aaryan won Best Actor In A Comic Role for Pati Patni Aur Woh.

Deepika and Ranveer will soon be seen together in Kabir Khan's sports drama '83, which releases on April 10.