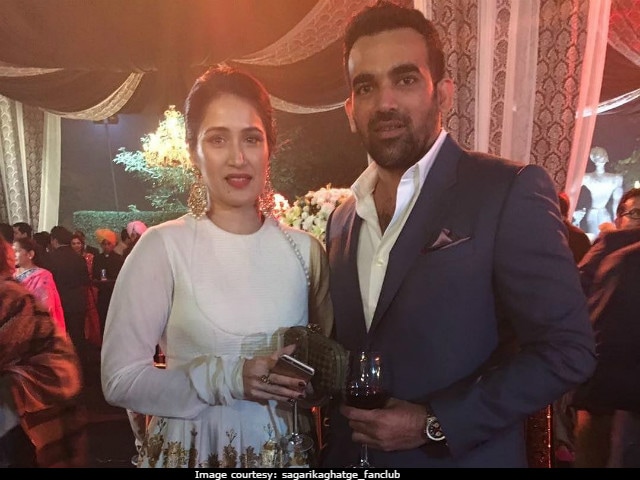 New Delhi: Cricketer Zaheer Khan announced his engagement to actress Sagarika Ghatge via a tweet on Monday. The Delhi Daredevils skipper, who has often been photographed with the actress, posted a picture of the two in which Sagarika is sporting her ring, and wrote, "Never laugh at your wife's choices. You are one of them. Partners for life. #engaged (sic.)". Sagarika, who is best known for playing the role of Preeti Sabarwal in the sports film Chak De! India starring Shah Rukh Khan, also posted a picture of the newly-engaged couple and wrote, "Partners for life! #engaged." Rumours that Zaheer Khan, 38, and Sagarika Ghatge, 31, were dating began circulating when they were pictured arriving together at Yuvraj Singh's wedding to Hazel Keech last year. However, the reported couple have not acknowledged their relationship till now.

Meanwhile, several cricketers congratulated the couple on their new journey together. Cricketer Yuvraj Singh, who married actress Hazel Keech in a week of celebrations last December, wrote, "Welcome to the other side fella. Hope it's always bright for both of you. Many congrats and very happy for you guys. (sic.)"

Welcome to the other side fella hope it's always bright for both of u many congrats and very happy for you guys @ImZaheer@sagarikavghatgepic.twitter.com/79r1fPDvoM

In fact, Yuvraj Singh had once posted a telling message to the 31-year-old actress, during the release of her film Irada earlier this year. He wrote, "All the best @sagarikavghatge for tonight. Remember you from the days when you dated a VC of the Indian team. Good choice, not do it in real life. (sic.)" Yuvraj was referring to Sagarika's role in Chak De! India where she played a member of the Indian women's hockey team, who was dating the vice-captain of the Indian cricket team. Sagarika was quick with a response. She wrote, "Thank you @YUVSTRONG1. Hahaha. I never intermingle reel with real. See you tonight.(sic.)"

All the best @sagarikavghatge for tonight remember ufrom the days when u dated a v c of the Indian team good choice not do it in real life pic.twitter.com/1Qq6TZ1WIh

Promoted
Listen to the latest songs, only on JioSaavn.com
Actor Abhishek Bachchan also congratulated the couple.

Sagarika Ghatge was recently spotted with Zaheer Khan in the Delhi Daredevils dugout during the team's match against Rising Pune Supergiant. She was last seen in Irada, along with Naseeruddin Shah, Divya Dutta and Arshad Warsi. She is also known for playing the lead role in the Marathi film Premachi Goshta.

One Post To Call Out All Trolls: Nushrratt Bharuccha's Handbook Of Dealing With Haters