Samantha Ruth Prabhu Gets Jalebi Treat From Her Trainer Junaid Shaikh. Here's Why 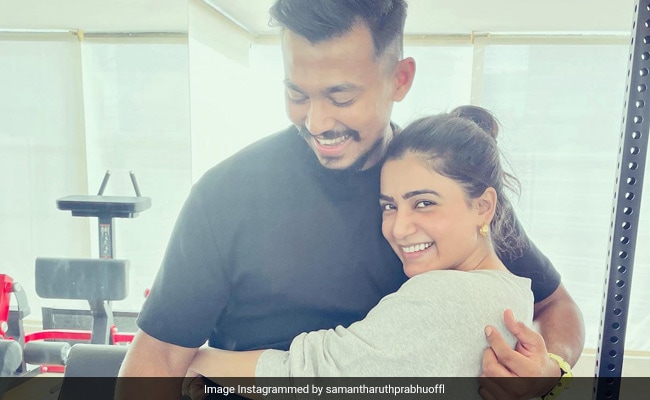 Samantha Ruth Prabhu, who is currently basking in the success of her newly released film Yashoda, shared a special post on social media. Who is it dedicated to? Her fitness trainer Junaid Shaikh. Samantha has shared some pictures and a video from her workout regime on Instagram. In one of the posts, we can see Samantha and Junaid sharing a warm hug. The note attached to the post read, “Junaid Shaikh has never ever thought I did enough to deserve my favourite Jalebi. But today, he did, to celebrate Yashoda's success and especially the action scenes.” Samantha, who is currently undergoing treatment for an auto-immune condition called Myositis, added, “The last few months you have been among the few people who have seen it all...My lowest of lows, through the weakness, through the tears, through the high dose steroid therapies, through it all.” She concluded, “You didn't let me give up.. and I know you won't let me ever give up. Thank you.” Replying to the note, actress Kriti Kharbanda wrote, “Sam,” with a heart emoji. Dia Mirza also dropped a red heart under the post.

Samantha Ruth Prabhu was “extremely nervous and especially excited” for the release of Yashoda. A day before the film hit the theatres, she had shared a picture of herself with her fingers crossed. “Extremely nervous and especially excited. One day to go. Mee andhariki Yashoda nachchalani gattiga korukuntunna [I hope that you will like Yashoda]. Good vibes to my directors, producer, cast and entire crew as they wait like me for your verdict tomorrow. All fingers and toes crossed.” She also used the hashtag “Yashoda from tomorrow.”

Just a few days before the release of Yashoda, Samantha Ruth Prabhu shared the news of her health on Instagram. Talking about her struggles with the rare disease Myositis, she said, “A few months back I was diagnosed with an autoimmune condition called Myositis. I was hoping to share this after it had gone into remission. But it is taking a little longer than I hoped. I am slowly realising that we don't always need to put up a strong front. Accepting this vulnerability is something that I am still struggling with. The doctors are confident that I will make a complete recovery very soon. I have had good days and bad days.... physically and emotionally.... and even when it feels like I can't handle one more day of this, somehow that moment passes. I guess it can only mean that I am one more day closer to recovery.”