The actress shared a special note on the experience on Instagram 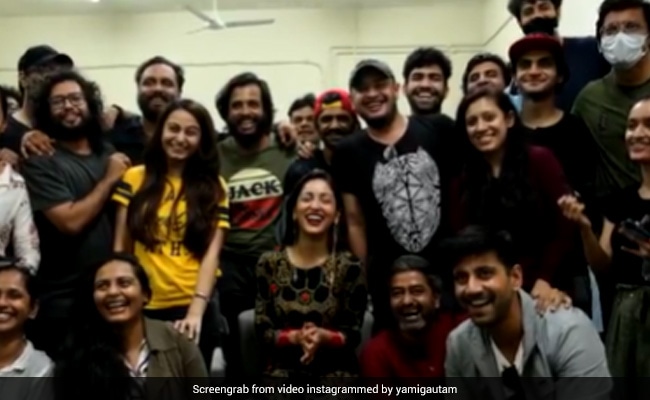 Yami Gautam has just finished shooting for her film A Thursday and only has good things to say about her experience. The actress, on Thursday, shared a video of herself from the sets of the film. In it, she talks about how memorable it has been to work on the project with the cast and crew. Yami Gautam, who got married recently, can be heard saying, “After my wedding, this is another thing that is going to take a little while to sink in; that A Thursday is over.” In the video, she is performing some scenes. Yami Gautam also interacts with children on set, plays and laughs with them.

The video ends with Yami Gautam saying, “Every day, I used to look forward to coming to the set... It is just about the energy, about the vibe…It's about the right people getting together to make something together.”

In the caption, Yami wrote, “It's never a me...it's always a WE, with the best of teams,” which is also something that she says in the video. She further said in the note, “Bidding adieu to the most beautiful team and taking some fond memories with me from the sets of A Thursday.”

Reacting to the clip, Behzad Khambata, director of the film said, “You are just fantastic…Thank you for bringing this film to life.” Several fans of the actress replied with heart emojis in the comment section.

Behzad also shared Yami Gautam's post on Instagram Stories, and wrote, “It's a wrap for Yami Gautam. Thank you so much.” Yami Gautam, in turn, shared Behzad's post and wrote, “Thank you, Behzad for this script and unforgettable teamwork.”

Yami Gautam married Bollywood director Aditya Dhar on June 4. The couple had an intimate wedding in her hometown in Himachal Pradesh. Though the news of the wedding came as a pleasant surprise to fans of the star, she has been keeping fans in the loop by sharing images and videos from the ceremony.

Recently, on the occasion of her father's birthday, Yami Gautam shared a video of the two taken at the actress' haldi ceremony. She also penned a sweet note dedicated to her “camera-shy” father.  “It took a wedding to finally have so many moments captured with my camera-shy father. Happy birthday to my amazing paa. And your non-stop commentary is more prominent than all of us present together in the frame, eh Surilie,” she wrote.

Here are some of the other photos and videos from the wedding:

In addition to A Thursday, Yami is awaiting the release of her film Bhoot Police. In it, she will be seen alongside Arjun Kapoor, Saif Ali Khan, and Jacqueline Fernandez.

"Didn't Feel Like Living Anymore": Deepika Padukone On Her Battle With Depression