One reason: If you want to see Fallout, the latest entry, no previous knowledge is required. Here's what you need to know going into Mission: Impossible - Fallout, the sixth entry in Tom Cruise's 22-year-old spy-movie franchise: absolutely nothing.

These minor details are the furthest the series has gone in developing story lines from one film to the next, and yet it doesn't matter. If you've never seen a "Mission: Impossible" film before - or, more likely, if you've seen dozens of other films in the interim and given over your mental space to countless other aesthetic and life experiences - there's no need to worry. You won't miss a beat. For that reason alone, the Mission: Impossible series stands apart from the typical blockbuster franchise, which is about world-building and paying off dense histories that can take several films to develop. It would be unthinkable, for example, to drop into the sixth Harry Potter film cold and expect to grasp the stakes and emotional complexity of an epic story more than a dozen hours in the telling. A superhero team-up such as Avengers: Infinity War - or any of the films in the Marvel Cinematic Universe, for that matter - demands the knowledge of its predecessors. And what's more, it expects you to remember the details as if you watched the films yesterday. It can make summer escapism feel like homework.

There's a related point that's more important and feeds into why Mission: Impossible has been so great for so long. Because there's no interest in a larger mythology, the only true mission the sequels have is to keep topping their predecessors. Fallout and Rogue Nation are the first two to share a director, Christopher McQuarrie. But after Brian De Palma set the standard with the first Mission: Impossible, it's been a game of Anything You Can Do I Can Do Better among some of the most skilled craftsmen in the business, with entries by John Woo, the Hong Kong action maestro behind Hard Boiled and Face/Off; J.J. Abrams, who created the superb TV spy series Alias and went on to direct Star Wars: The Force Awakens; and Brad Bird, the writer-director of The Incredibles films for Pixar.

The plug-and-play adventures of Ethan Hunt, like James Bond movies, include a handful of compulsory elements - "Your mission, should you choose to accept it," "This message will self-destruct in five seconds," the unmaskings, among others - and the standard byzantine plotting about terrorist cells, rogue agents and other mischief-makers hellbent on mass destruction. 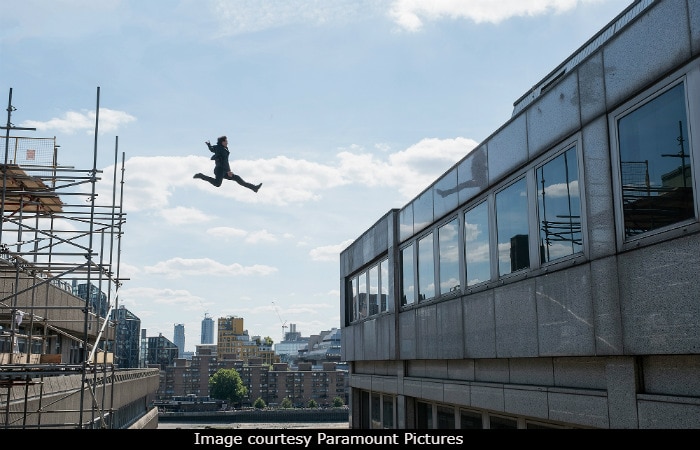 But starting with the break-in at the CIA headquarters in Langley, Virginia, in the first "Mission: Impossible," the films have always been built around the set pieces, those discrete units of suspense and derring-do that have steadily escalated with each sequel. Fans of the series are probably more likely to identify the individual film as "the one where he climbs Burj Khalifa" or "the one where he's underwater" or "the one with the helicopters" than by their actual titles. You can watch "Mission: Impossible - Ghost Protocol" a half-dozen times and still not remember what "ghost protocol" means, but you won't forget Tom Cruise dangling off the world's tallest building.

Even harder to remember is the pretext for Ethan Hunt's putting himself in harm's way. Hunt dangles more than 100 floors above the ground from the Burj Khalifa skyscraper in "Ghost Protocol" - with only a malfunctioning pair of high-tech climbing gloves separating him from disaster - for the mundane purpose of accessing a computer server room. Hunt dives into an underwater vault for three minutes (and quite a bit of change) in Rogue Nation for the purpose of swapping out a security profile so an IMF team member can access a building. Again, there's the overarching goal of protecting the world from catastrophic danger - loose nukes, viral outbreaks, toxic chemicals, the usual - but whatever it takes to get Tom Cruise to dangle 1,700 feet above the streets of Dubai will do. It doesn't matter.

What matters is the thrill of the moment, like checking out the new attraction at your favorite theme park. And the emphasis on physical stunt work and on the classical construction of suspense sequences has deepened the films' niche appeal over time, contrasting sharply with a superhero cycle that's embraced the plasticity of CGI. The first "Mission: Impossible" was produced in the early years of digital effects, when they were ascendant but not dominant. The last few entries, by contrast, have been a dazzling respite from the green-screen-heavy, motion-captured norms of the standard blockbuster, a reminder that real locations, bruising stunts and exquisitely choreographed action sequences have a visceral impact that ones and zeros can't replicate.

The Mission: Impossible franchise is above all a monument to Tom Cruise - or, more accurately, Cruise's monument to himself, given that he has been the sole driving force of the series from the beginning. (One piece of trivia: Ving Rhames, as the IMF computer hacker Luther Stickell, is the only other cast member to appear in all six films.) Cruise's curation of directorial talent has kept it from going stale and epitomizes a career kept aloft for decades by great filmmakers such as Steven Spielberg, Martin Scorsese, Oliver Stone, Stanley Kubrick, Cameron Crowe and Doug Liman.

Yet seeing the 56-year-old Cruise in Fallout - where he leaps from buildings, gives up his body to choreographed fights and does his inimitable straight-backed sprint through open space - is to witness a true entertainer at work. Cruise broke his ankle during the making of Fallout, but he makes it seem like it's his pleasure to do so. To keep this endorphin rush of a series going, he'd break every bone in his body.

(Except for the headline, this story has not been edited by NDTV staff and is published from a syndicated feed.)
Comments
Mission Impossible - fallouttom cruise