Why Paul McCartney Marched For Gun Law - One Of His Best Friends Was Shot. John Lennon

"One of my best friends was killed in gun violence right around here," McCartney said, "so it's important to me." He was referring to John Lennon 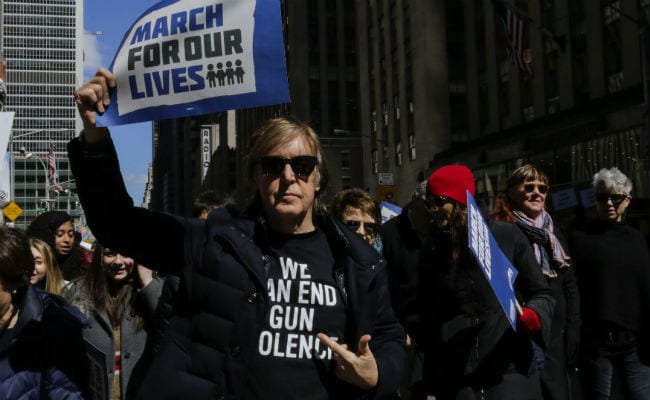 On Dec. 8, 1980, Mark David Chapman clutched a .38 Special revolver loaded with hollow-point rounds, took aim and fired four bullets into the back of John Lennon outside his Manhattan apartment.

On Saturday, fellow Beatle Paul McCartney, wearing a shirt with "We can end gun violence" emblazoned on the front, was on hand for the March for Our Lives rally in New York, joining thousands of marchers calling for stricter federal gun laws in the wake of the Parkland, Florida, shooting on Feb. 14.

"One of my best friends was killed in gun violence right around here," McCartney told CNN, "so it's important to me." He was referring to Lennon, his former bandmate in arguably the biggest music group ever, who was killed more than 30 years ago.

More than 800 events were scheduled to take place around the world Saturday, according to March for Our Lives organizers, including the anchor event in Washington.

Organizers held rallies in cities along the arc of two decades of mass killings. One was held in Parkland, where 17 students and educators at Marjory Stoneman Douglas High School were shot to death by a lone gunman. One was held in Las Vegas, where a gunman killed 58 people at a country music festival last year. In Jonesboro, Arkansas, a Saturday rally marked the 20th anniversary of a middle school shooting there that left four students and a teacher dead; it had been carried out by two classmates.

Nearly 200 people have died in school shootings since the 1999 massacre at Columbine High School in Colorado, which killed 13 people. Since then, more than 187,000 students attending at least 193 primary or secondary schools have endured a shooting on campus during school hours, according to a Washington Post analysis.

In Southern Maryland on Tuesday, Jaelynn Willey, 16, was shot in the head at Great Mills High School by a fellow student. Her family decided to take her off life support, and she died Thursday. Willey's classmates, decked in green-and-gold school colors, joined the Washington march.