When Vidya Balan Ate Cake With Rituparna Sengupta: A Tale Of 2 Begum Jaans 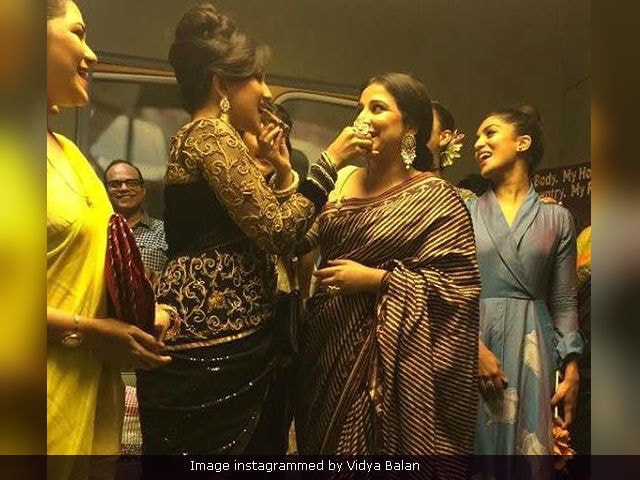 New Delhi: Actress Vidya Balan is on promotional spree for her upcoming film Begum Jaan, directed by Srijit Mukherji. During on such trip she met Srijit's 'other Begum Jaan,' actress Rituparna Sengupta. Begum Jaan is a Hindi adaptation of Bengali film Rajkahini, which featured Rituparna Sengupta in lead role. Both actresses met during one promotional event and as Vidya put it in caption: "When both the #BegumJaans meet...Cake ka partition toh banta hai!! (sic)." Both Rituparna and Vidya aced sari style and looked happy cheering each other. Srijit Mukherji, who has directed both films, was also there with both the Begum Jaans.

When both the #BegumJaans meet...Cake ka partition toh banta hai!!

Recently, Srijit Mukerjee told Hindustan Times he intended to make Rajkahini as a bilingual film starring Vidya Balan. "Only after I didn't get her dates and things didn't work out, I thought of doing the Bengali film and approached Rituparna," he said. Soon after this interview, Rituparna told DNA that she never knew Srijit wanted to cast Vidya Balan in the original film as well. "We were in talks about doing a film together for the longest time. Srijit had told me that he would come to me only when he had a role which matters. I was in Delhi attending an event. When I checked my phone, I saw it had 10 missed calls! He called again and said, 'I have got something very exciting for you. I asked him to wait for me till I returned and the moment I reached Kolkata he was at my home, ready with the script and concept."

Srijit then said that he was misquoted and explained that the original bilingual film was to be made with Vidya Balan and Rituparna knew about it. Later, when the film was made in Bangla, Rituparna was the only choice for the lead role. "I had a word with Rituparna and she laughed it off," Srijit told news agency PTI.

But no harm has been done. Looking at the pictures above, it is safe to say that there is no miscommunication or bad blood between the trio.

Begum Jaan is the story of brothel madam Begum Jaan, who lives in a secluded haveli with a small group of people. The partition line (or Radcliffe Line) for India and Pakistan proposed by the East India company passes through Begum Jaan's haveli, who refuses to vacate the place. Begum Jaan, along with her troop put up one helluva fight to retain their home.

Promoted
Listen to the latest songs, only on JioSaavn.com
Begum Jaan also stars Gauahar Khan, Pallavi Sharda, Rajit Kapoor and Naseeruddin Shah and will hit the screens on April 14.