Anushka was Varun's partner in crime 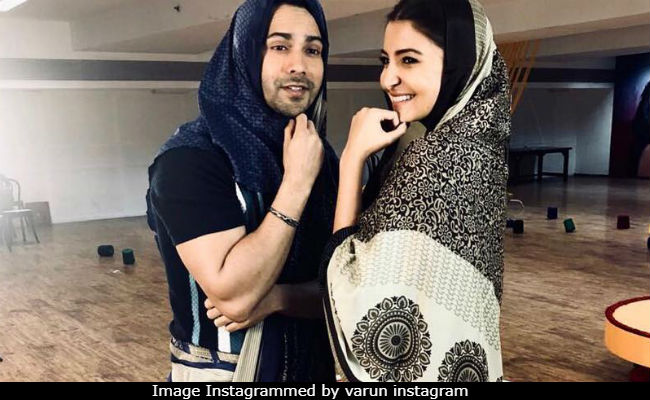 Varun Dhawan and Anushka Sharma are currently busy with the promotional duties of their upcoming film Sui Dhaaga, which means expect all kinds of craziness from Varun. On Tuesday, Varun went a step ahead as he wanted to experiment with his promotion special wardrobe - he draped a saree just like Anushka's character Mamta does in Sui Dhaaga. In photos and boomerangs shared on the stars' Instagram accounts, it is clear that Anushka was his partner in crime. "Don't ask," wrote Anushka while Arjun Kapoor commented "legend hai yeh aadmi." Shared on Tuesday evening, the photo garnered over 2 lakh likes within an hour.

Varun, who also shared a similar post on Instagram, wrote: "Some craziness between Mamta and Mauji par sab badhiya hai." In the caption, Varun actually made a reference to his character Mauji in Sui Dhaaga and his signature dialogue: "Sab badhiya hai." In Sui Dhaaga, Varun Dhawan has been cast as Mauji, a simple village person who establishes his own entrepreneurial 'Made In India' label after tremendous hardships and constant support from his talented wife Mamta.

Sui Dhaaga promotes the concepts of 'Made In India' and encouraging budding entrepreneurs from the rural sector's on India, for which both Anushka and Varun had to shed their "glamourous" onscreen persona. But the film continues to be special, said Varun: "This film is very special for me and Anushka. I don't think I can describe the feeling in words. It's a sense of pride and a sense of what you feel to be an Indian. What it feels to be an Indian, we are never able to tell that to people. Patriotism doesn't always need to be said, it needs to be felt," reported news agency IANS.