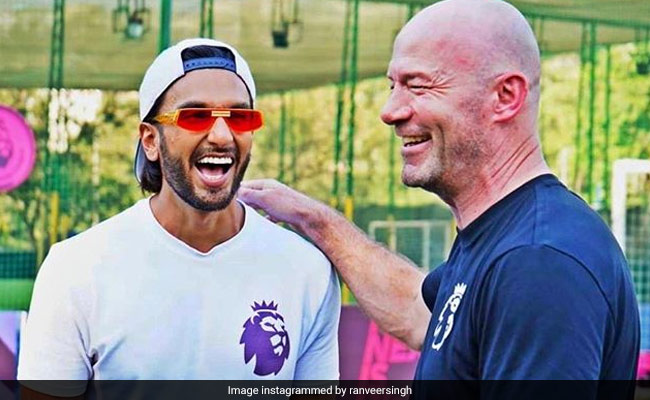 Ranveer Singh, who is currently busy shooting for his upcoming sports-drama '83 based on the which is based on India's iconic 1983 World Cup victory, scooped some time out of his schedule to meet the veteran former England footballer Alan Shearer. The actor on Monday, posted a picture on his Instagram profile where he can be seen laughing his heart out with the footballer. In the candid photograph, the 34-year-old actor can be seen in a white jersey with a cap and tinted shades while Alan Shearer can be seen in a blue jersey. The actor captioned the post: "Footballing royalty. Good times with Alan Shearer." Alan Shearer who is a veteran England footballer and currently BBC's football analyst dropped a comment on Ranveer's post saying, "Great meeting you and a brilliant afternoon." 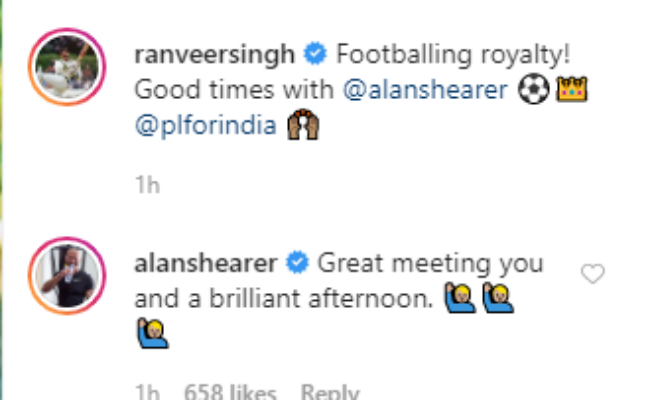 On the work front, Ranveer Singh is best-known for his performances in Simmba, "Padmaavat", Bajirao Mastani, Dil Dhadakne Do, Ladies vs Ricky Bahl , Goliyon Ki Raasleela Ram-Leela and Lootera among others. The actor was last seen in 2019 musical-drama Gully Boy where he shared screen space with Alia Bhatt and Siddhant Chaturvedi. He will be next seen in a special appearance in Rohit Shetty's action-drama Sooryavanshi beside Akshay Kumar, Ajay Devgn and Katrina Kaif. Sooryavanshi is the fourth installment of Rohit Shetty's police universe after Singham, Singham Returns and Simmba. The movie is slated to release on March 24.