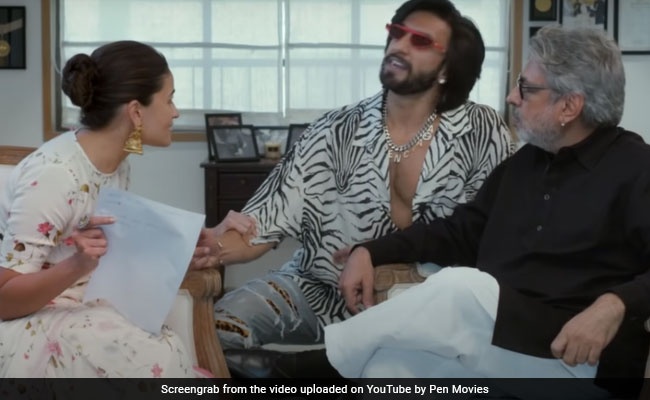 Alia Bhatt's Gangubai Kathiawadi has made a lot of buzz this season. The brilliance of the larger-than-life character has got most of us filled with awe and wonder. And, Alia knew that fans are filled with questions. So what did she do? Alia invited the director of the film Sanjay Leela Bhansali to sit for an interview with her. Excited, already? We suggest you must wait. Reason? There was an uninvited guest. We are talking about Ranveer Singh. The actor crashed into the interview and how. Towards the end, when Alia wanted to ask a few questions from a sheet of paper, Ranveer made a dramatic entry.

While pointing towards Ranveer Singh, Sanjay Leela Bhansali said, "I have a problem in my destiny. This is one of them." The actor replied, "You manifested me." Alia Bhatt joined the banter and said that she was surprised that the first question that she was about to read out was from a person named Ranveer Singh. She asked, "How have you done this?" Ranveer Singh replied, "It's a cosmic connection baby. Maine socha dono ek saath. Ye kaise mauka main heath se jaane doon [I thought two of you are at one place. How can I leave this opportunity?]" Sanjay Leela Bhansali cut it short, "Great. Shall we wind up?"

Alia Bhatt captioned the video, "In conversation with the one and only - Sanjay Leela Bhansali. Love you, sir." Shantanu Maheshwari, Alia Bhatt's co-star in  Gangubai Kathiawadi, has called it “the best interview”. Singer Shreya Ghosal followed suit.

Gangubai Kathiawadi's releasehas been wrapped in various controversies. So, Alia Bhatt, during the interview session, asked the director, "What was the first moment when you could breathe?" He said, "I think that moment happened primarily in Berlin." That's where he saw the film being screened and attended his first press conference. When he saw people stand up and clap for the film, "That was the moment that reassured me," he added.

Sanjay Leela Bhansali also opened about his life that has always been infused with music and dance. "I don't have to dig deep. I don't have to do my homework," he said with confidence.

And, here's what Sanjay Leela Bhansali had to say about his experience with Gangubai Kathiawadi, "I had a blast expressing myself in this film."