When Niharika Konidela And Chaitanya JV Went Snorkeling In Maldives 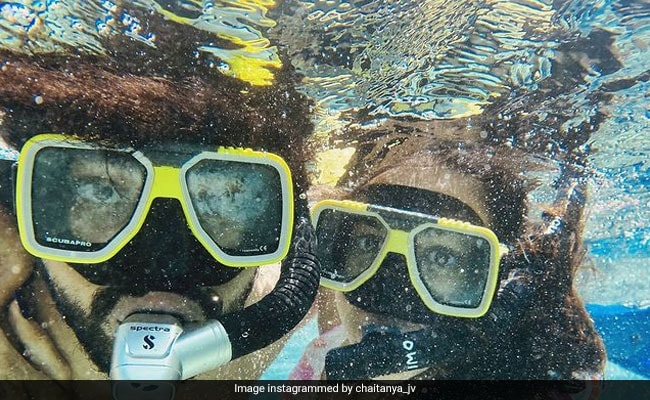 Niharika Konidela, who got married to Hyderabad-based techie Chaitanya earlier this month in Udaipur, has actively been sharing pictures from their honeymoon. The couple, who are currently in Maldives for their honeymoon, flew to the island nation after celebrating Christmas with their family in Hyderabad. On Monday, Chaitanya JV shared a post from their snorkeling session together in Maldives. Sharing the underwater picture, he captioned the post: "Some Sunday snorkeling with my dolphin." The newlywed couple frequently share mushy posts with each other on Instagram.

On Christmas, Chaitany JV shared a picture from his and Niharika's festivities. He also added a picture with their pet pooch and he captioned the post: "With our own Christmas cheer.#buzz #goldenretrieversofinstagram #family #christmas."

Niharika Konidela began her career a television presenter, after which she switched to starring in web-shows, which were produced by her production firm Pink Elephant Pictures. Muddapappu Avakai, Nanna Koochi and Madhouse are the three web-shows she starred in and also produced. She made her debut in films with 2016 movie Oka Manasu. Niharika Konidela was last seen in Sye Raa Narasimha Reddy.