Rahul Bose and Konkona Sen Sharma, co-stars of Mr and Mrs Iyer, recently met on a flight to Melbourne 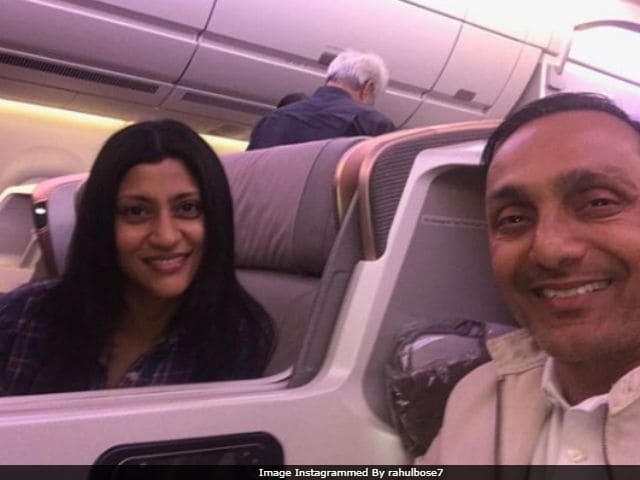 New Delhi: Actors Rahul Bose and Konkona Sen Sharma, co-stars of 2002 film Mr and Mrs Iyer, recently met on a flight to Melbourne. Rahul Bose, 50, shared a picture of himself with Konkona, 37, on Instagram and wrote, "Mr and Mrs Iyer shared a bus and train ride 14 years ago. Now they share a plane ride," with the hashtag, "she looks the same." (We are absolutely delighted to see 'Mr and Mrs Iyer' again). The actors seem to be flying to Melbourne to attend the Indian Film Festival of Melbourne (IFFM) 2017. Mr and Mrs Iyer, a critically-acclaimed film, directed by Aparna Sen, Konkona's mother, was premiered at the Locarno International Film Festival and at other prominent film festivals. It also won several national and international awards. Konkona had received the National Film Award for Best Actress for her performance in Mr and Mrs Iyer.

Konkona's last release Lipstick Under My Burkha, will be premiered at this year's IFFM, reports new agency PTI. The Alankrita Shrivastava-directed film was denied a certificate from the Censor Board. However, it released with 'A' certificate and a few cuts as suggested by the Film Certification Appellate Tribunal. PTI further reported that celebrities like Aishwarya Rai Bachchan, Karan Johar, Raveena Tandon, Malaika Arora, Rajkummar Rao, Dangal director Nitesh Tiwari and others will also attend the 13-day festival.

Meanwhile, Rahul Bose has worked in films such as Jhankaar Beats, Chameli, Pyaar Ke Side Effects and Shaurya. His last release was Poorna, a film based on Malavath Poorna, youngest girl to climb Mount Everest. Konkona Sen Sharma debuted as a director this year with A Death in the Gunj.