"Time to introduce Ahil to all that the world has to offer," wrote Arpita Khan Sharma 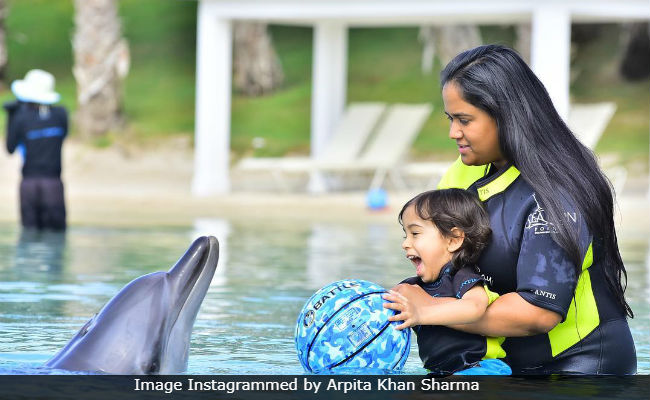 Arpita Khan Sharma and Ahil's pictures from their Dubai vacation are making the Internet very happy. On Wednesday, Arpita shared adorable pictures of her 2-year-old son, who can be seen playing with his little friend, who happens to be a dolphin. In one of the pictures, Ahil can be seen planting a kiss on Danita (that's the name of the Dolphin). Arpita captioned the picture: "Time to introduce Ahil to all that the world has to offer!" In a separate picture, the mother-son duo can be seen playing with the aquatic creature and we must tell you Ahil's expressions are way too cute to be missed. "Breaking the ice between Ahil and Danita the beautiful dolphin," read the caption on Arpita's post.

Take a look at the pictures from Ahil and Arpita's Dubai diaries here:

Time to introduce Ahil to all that the world has to offer ! #ahilsdairies#dubai#atlantis#

We got a glimpse of Ahil and Arpita's fun-filled Dubai diaries through the Instagram posts shared by her. A few days ago, she shared a video, in which the little munchkin can be seen playing a game at Legoland. Arpita wrote: "Catching the big fish."

Arpita's social media posts frequently feature Ahil with his mamuSalman. Last month, she shared a video, in which Salman could be seen instructing Ahil (who was smeared with paint), to walk on the canvas. "Ahil's first painting on canvas escapade with mamu," Arpita wrote. ICYMI, check out the video here:

Arpita got married to Delhi-based Aayush Sharma in 2014. Aayush recently made his Bollywood debut with the 2018 film LoveYatri