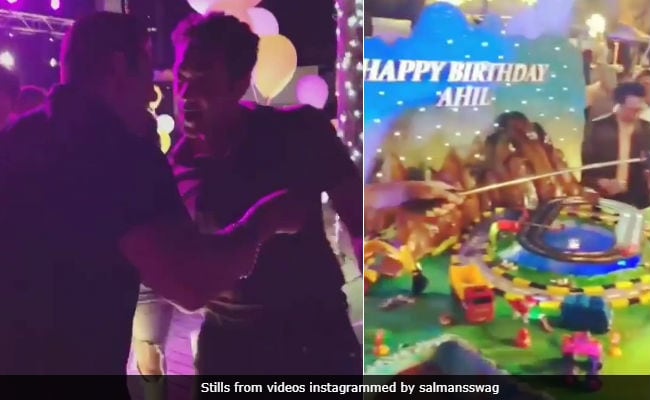 New Delhi: Salman Khan's nephew Ahil turned two-years-old on March 30 and the Khandaan partied hard with the toddler in Abu Dhabi. Salman Khan is currently filming Race 3 in Abu Dhabi and the 52-year-old actor's entire family joined him there to celebrate Ahil's birthday. Salman Khan's Race 3 team also partied with the actor and his family. Fan clubs shared pictures and videos which gave a glimpse of all things nice from Ahil's birthday party. Ahil's birthday cake was grander than anyone could have imagined. Then there was Salman Khan and Bobby Deol dancing to Diljit Dosanjh's Do You Know and Aripita and Jacqueline recreating the hook step of Jumme Ki Raat.

Promoted
Listen to the latest songs, only on JioSaavn.com
Arpita, who married Aayush Sharma in November 2014, shared two adorable Instagram posts - one a birthday message for her son and one of Ahil and Aayush having a splash together:

Dearest Ahil, here's wishing you a very happy birthday & many many more to come. I can't thank you enough for coming into my life two years back & filling it with so much joy,love & security. You are my world & everything I could have ever asked for. You are the best son & I hope I can always be the best mother. I love you very very much #AhilTurnstwo

My two babies having a blast! This day wouldn't have been possible without you @aaysharma #AhilTurnstwo

Salman Khan's Race 3 team is filming some superb action sequences in Abu Dhabi. Apart from Salman, Jacqueline and Bobby Deol, actors Anil Kapoor, Daisy Shah and Saqib Saleem are also there. Race 3 is directed by Remo D'Souza and it is expected to release on Eid this year.
Comments
salman khansalmna nephew birthdaybobby deol