When Amitabh Bachchan "Helped" Ishaan Khatter "Get Admission Into School"

Ishaan Khatter, in his caption, wrote, "Happy birthday Amit (Amitabh Bachchan) ji from a child you once helped get admission into a school" 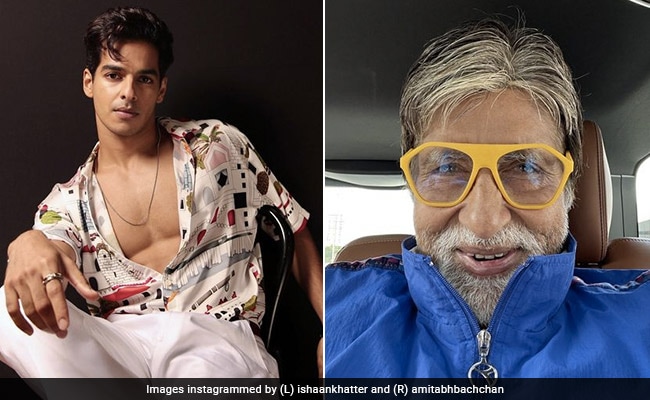 Did you know that Amitabh Bachchan once “helped” Ishaan Khatter get enrolled in a school? Yes, it's true. Ishaan made this revelation in his birthday post for the megastar. Big B celebrated his 80th birthday on Tuesday. Ishaan, son of actors Rajesh Khattar and Neelima Azeem, shared a picture of Amitabh Bachchan from his 1975 film Deewaar. In the caption, Ishaan wrote that he learnt about Big B's role in his schooling much later in his life. Ishaan also shared that Amitabh Bachchan will always be a part of his education, be it as a student of life or cinema. When Neelima Azeem and Amitabh Bachchan were shooting for Sooryavansham, in the 90s, the actor offered to help her in getting Ishaan enrolled in a good school (more on that later).

Ishaan Khatter, in his caption, wrote, “Happy birthday Amit (Amitabh Bachchan) ji… from a child you once helped get admission into a school. I only learnt this once I was older, little did I know that you would be part of my education forever... As a student of life and of cinema.”

Like many others, Ishaan Khatter also gets inspired by watching Amitabh Bachchan “trailblazing in his silent resilience.” The actor added in his caption, “There is no greater inspiration than watching you trailblazing in your silent resilience. My mom always told me there is greater power in silence. I see that in you. Thank you for all that you are and all that you have given to the world of cinema.”

Ishaan Khatter is Neelima Azeem's son with her second husband Rajesh Khattar. They parted ways in 2001 when Ishaan was around 6. Neelima's firstborn, Shahid Kapoor, with ex-husband Pankaj Kapur, is also a renowned actor.

In an exclusive interview with ETimes, Ishaan Khatter recently revealed that Amitabh Bachchan met the authorities of a reputed school and made sure he got admission into it. “Not many people know this, but he's done a huge favour to me, even before I became an actor. He was the reason why I got admission to my school. My mother (Neelima Azeem) was working with him at the time. It was very difficult to get admission into that school and Mr Bachchan paid a personal visit to the authorities and the principal,” Ishan was quoted as saying.

He added, “I only found out about this much later in life, once I was an adult. But can you imagine that? Amitabh Bachchan did that so that a kid could get a good education.”

Ishaan Khatter followed Big B and his elder brother's footsteps and made his acting debut with Beyond The Clouds in 2017.  His next film was Dhadak (2018).

Ishaan has Phone Bhoot with Katrina Kaif, and Pippa lined up now.