What's More Poetic Than This Pic Of Ishaan Khatter? His Caption 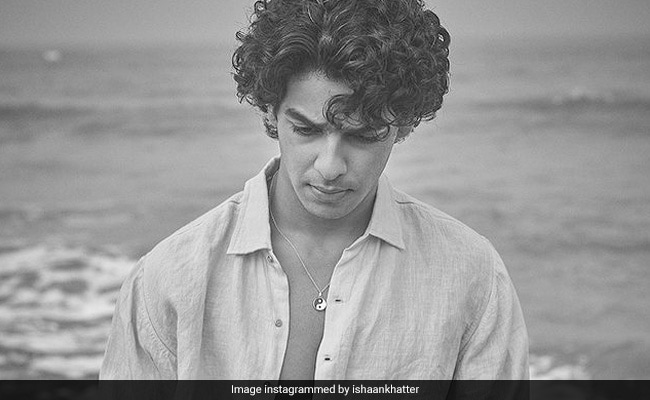 Actor Ishaan Khatter, on Wednesday, treated his fans to a brand-new picture of himself. In the monochrome picture that he shared on Instagram, Ishaan Khatter can be seen posing on the beach. He can be seen dressed in a simple yet stylish shirt. Ocean waves at the beach form the background of Ishaan Khatter's new picture. In the caption of the post, Ishaan wrote a poetic note about Mumbai's relationship with rain. "Shayad baarish hi is sheher ki mehbooba hai (Maybe rain is the lover of this city)," Ishaan wrote in the caption of his post. Ishan's post received many comments from his Instafam including one from Siddhant Chaturvedi, who left a poetic comment on the post. "Boond boond apna hak yun jataati hai (Every drop expresses its ownership over the city)," Siddhant Chaturvedi wrote in his comment. Singer Armaan Malik also commented on Ishaan Khatter's post and wrote: "Kya deep thoughts hain aapke janaab (you have very deep thoughts sir)."

Ishaan recently enjoyed a vacation in Uttarakhand with his mother, actress Neelima Azeem. He shared several pictures from his trip on Instagram. He shared a solo picture that featured him looking at the sky. He also shared a solo picture of Neelima Azeem. "Moon moon ke na dekh," Ishaan wrote in the caption as he tweaked the lyrics of the old classic song Mud Mud Ke Na Dekh.

In terms of work, Ishaan was last seen in Khaali Peeli, co-starring Ananya Panday. He also featured in Mira Nair's web-show A Suitable Boy, co-starring Tabu. He will next be seen in horror-comedy Phone Bhoot.The film will also star Katrina Kaif and Siddhant Chaturvedi.

On Hrithik Roshan's Birthday A "Big Hug" And Wishes From Ex-Wife Sussanne Khan. See Her Post