"Such is the intensity of the filming process by Ram Madhvani that even after a 'cut' I kept crying," wrote Sushmita Sen 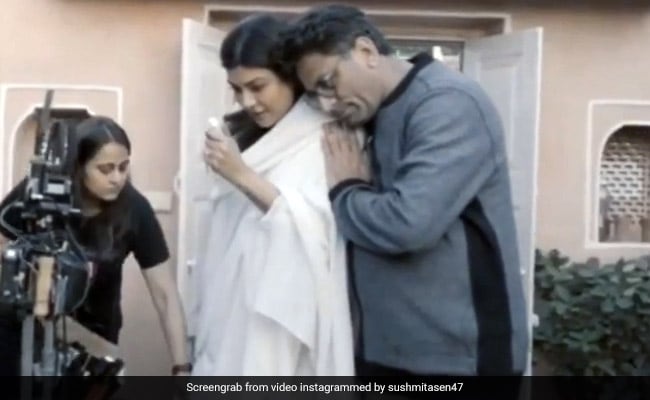 Sushmita Sen in a still from her video (courtesy sushmitasen47)

Sushmita Sen made a stunning comeback with the web-show Aarya, which started streaming on Disney+Hotstar VIP June 19 onwards, and she can't just get over the wonderful time she had on sets. Directed by Ram Madhvani, Aarya is the story of the titular character's (played by Sushmita) transformation from a homemaker to fierce mother who gets embroiled in her husband's murky business. Aarya, an emotional potboiler in parts, also had a few emotionally sensitive moments on sets, one of which Sushmita Sen shared in a recent post on Instagram. Sharing a behind-the-scenes moment from Aarya sets, Sushmita wrote: "Tears keep rolling even when the camera stops!"

In the video, Sushmita can be seen shooting an emotionally heavy scene, in which Aarya breaks down after feeling betrayed by her loved one. However, what makes the video special is that it captures tears streaming down Sushmita's face even after the shot ended. Sharing the video, the 44-year-old actress wrote: "One of the important defining moments in Aarya. 'Heartbreaking realisation of betrayal' One of my favourite scenes performed brilliantly by 'Maa' Sohaila Kapur. Such is the intensity of the filming process by Ram Madhvani that even after a 'cut' I kept crying... embarrassed further by his appreciative hug! Energy doesn't lie! Sharing cherished moments. What a team! I love you guys!"

One of the important defining moments in #Aarya "Heartbreaking Realisation of Betrayal" One of my favourite scenes performed BRILLIANTLY by #Maa @sohaila.kapur Such is the intensity of the filming process by @madhvaniram that even after a "cut" I kept crying..embarrassed further by his appreciative hug!!! Energy doesn't lie!!! #sharing #cherished #memories #bts #Aarya #inthemoment WHAT A TEAM!!! I love you guys!!!!

Sushmita Sen co-stars with an ensemble cast comprising Chandrachur Singh, Sikander Kher, Namit Das, Vikas Kumar, Jayant Kripalani among others in Aarya. NDTV's review of Aarya, singles out Sushmita Sen's performance like this: "The actress has been away for a while but she hits the ground running in Aarya. The character she plays is never fully in control in a toxic male-dominated word, but Sen is on the top of her game all the way through. As long as she is at it, Aarya, adapted for India by Ram Madhvani and Sandeep Modi from the Dutch drama series Penoza, keeps you glued to the screen."