Neetu Kapoor will turn 63 on Thursday 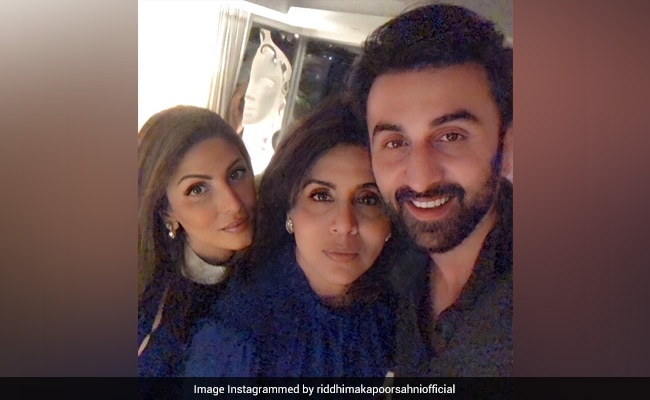 On Neetu Kapoor's birthday eve, her daughter Riddhima Kapoor Sahni shared a glimpse of her "birthday dinner." Neetu Kapoor will turn 63 on Thursday. On Wednesday evening, Riddhima posted a photo of herself with Neetu Kapoor and brother Ranbir Kapoor and wrote: "Me and mine! Happiest birthday, Ma! We love you so much." Neetu Kapoor looks gorgeous in a blue outfit in the picture while Ranbir, as usual, looks dashing in what appears to be a back kurta. Sharing the same picture on her Instagram story, Riddhima wrote: "Birthday dinner." In the comments section, fans described Neetu Kapoor and her family as "the most beautiful family" and also dropped red heart icons for the trio.

Neetu Kapoor caught the attention of her fans recently when she posted a group photo featuring son Ranbir, his girlfriend and actress Alia Bhatt, Riddhima and her daughter Samaira. Neetu's caption was as adorable as the photo. "My world," she wrote.

Neetu Kapoor and her children are a part of Bollywood's Kapoor clan. Did you know that Riddhima was also got film offers when she was 16-17? It's true. In an interview with Times Of India earlier this year, Riddhima recalled the time when she used to get film offers and said: "When I was in London, I was getting a lot of film offers but I don't think I ever thought of it. Not that I even had a discussion about it with my family. I came back from London and got married. When I was studying, I remember my mother would tell me about the film offers coming my way and I'd wonder what to make of them because I was only 16-17 at the time."

Neetu Kapoor will next be seen alongside Anil Kapoor and Varun Dhawan in Jug Jugg Jeeyo.