What Reviews Of Tom Hardy's Venom Are Saying: 'A Fun, Fascinating Mess,' And More 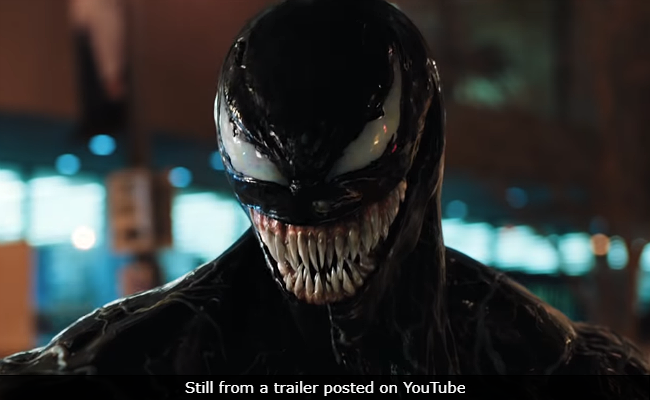 Just because a movie is a disjointed, clunky oddball of a bizarrely retro misfire doesn't mean it's not, well, entertaining.

That seems to be the closest thing to a consensus among the first wave of reviews for Venom, which represents Sony's effort to build out its own superhero universe.

Now, to be clear, the critics' scores as tallied are about as dismal as it gets for a big-budget superhero movie. Venom, which stars the always interesting Tom Hardy in a dual role, scores a dismal 28 percent "Fresh" rating on Rotten Tomatoes, and an average reviewer score of only 35 (out of 100) on Metacritic.com.

As the Chicago Tribune writes: "It's a mess, but wow, is it ever a fun, fascinating mess."

In Venom, which opens Friday, Hardy plays both Eddie Brock, a Bay Area digital journalist, and Venom, Brock's alien symbiote that imbues Eddie with superpowers when not also challenging his self-esteem - as if Eddie's hosting a mighty parasite who's also an insult comic. The result, as directed by Ruben Fleischer (Zombieland), can play like a one-man buddy picture that summons comparisons to Liar, Liar and All of Me - if either of those body-takeover comedies were set against a middling Marvel superhero-film narrative circa 2004.

The Chicago Tribune also writes - with a certain disdain for the big Marvel and DC film-universe tentpoles - that a real mess of a movie is "so much more thrilling than any of the formulaic superhero movies that parade through multiplexes all year."

The AV Club, meanwhile, picks up on the retro sense of craft:

"Venom, the solo vehicle for the symbiote-based, head-chomping antihero, has more of a mid-2000s vibe. It's reminiscent of the post-Spider-Man, pre-MCU superhero pictures, the ones made with some degree of star power and/or production value but lacking a sense of purpose beyond showing off a live-action exclamation of a famous comics character. It's Daredevil! It's Ghost Rider! It's the Fantastic Four! What else do you rubes want?"

Variety also comes away with a split decision, calling the movie a "spectacular but mostly derivative and generically plotted new comic-book origin story" in which Hardy sounds "like a cross between early Marlon Brando and late Adam Sandler."

But the Wrap, for one, doesn't join in the fun, writing: "Leaping from plot point to plot point without the hindrance of logic or characters, this big-screen return of the legendary Spider-Man nemesis - last seen in the franchise-hobbling Spider-Man 3 - is aggressively loud and stupid without being much fun at all. It exists as a waste of time ... for some very talented actors." (The film co-stars Riz Ahmed, Michelle Williams, Woody Harrelson and Jenny Slate.)

The Hollywood Reporter, too, describes Venom as a throwback of a superhero movie for all the wrong reasons - a "thoroughly irredeemable" work that's out of step with rival titles in 2018:

"At a time when the Marvel universe is both expanding adventurously (Black Panther) and wrapping up other story lines (Avengers: Infinity War), Venom feels like a throwback, a poor second cousin to the all-stars that have reliably dominated the box-office charts for most of this century. Partly, this is due to the fact that, as an origin story, this one seems rote and unimaginative. On top of that, the writing and filmmaking are blah in every respect; the movie looks like an imitator, a wannabe, not the real deal."

And the Los Angeles Times finds that Venom suffers from comparison to not only Marvel Studios movies, but also Fox superheroes, writing:

"Next to the much more visually and narratively elaborate entertainments that make up the Marvel Cinematic Universe - or even compared with other snarky anti-superhero movies like Deadpool - Venom feels like pretty weak poison.

"Which is not to say that it's terrible, exactly. For a movie conceived as a liberating celebration of badness, it's probably nowhere near as bad as it should be."

IndieWire invokes the film's own central dynamic to reflect the two choices that each filmgoer has when viewing this odd film: "Reject the parasite or let it take you over. Fight it off and you'll have a bad time; become one with it and you may achieve a kind of symbiosis."

One of the harshest reviews is filed by the New York Post, which calls this assembly-line product "a disaster on every level, from the hatchet job writing to the horrid performances" that puts "its focus on juvenile humor instead of heart or action."

Yet Uproxx sees a silver lining in Venom's potential for cult-movie status:

"Get as many friends as you can, go to the theater, buy tickets for Venom, then have the time of your life as you laugh and laugh.

"Now, I do want to make it clear that I think 'Venom' is not a good movie, but I also want to make it clear that I had the time of my life watching it. I think in a couple of years, Venom could be the type of movie that sells out midnight showings as people come up to the screen and act out their favorite parts - like a Rocky Horror Picture Show type of thing. My point is, if you're in the right group and right frame of mind, 'Venom' is really fun to watch."