A Definitive Ranking Of Tom Hardy's Film Accents, From Venom To Bane 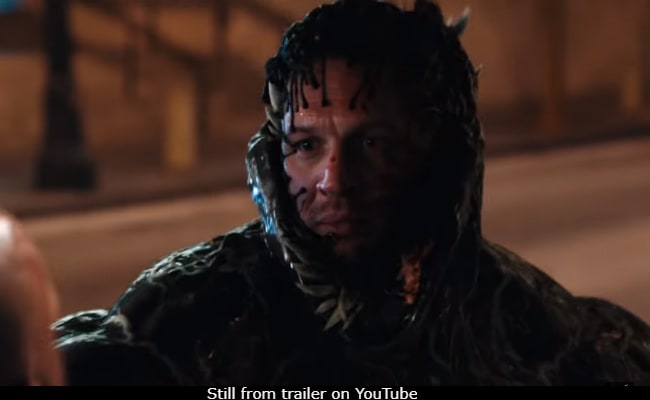 When Sony Pictures released the first trailer for Venom almost six months ago, there was almost too much in it to fully process: Investigative reporter Tom Hardy is a regular Bob Woodward, which apparently means he needs to threaten Jenny Slate while standing near boxes of penne rigate! She definitely mispronounces "symbiote" while referring to evil genius Riz Ahmed's villainous experiments! Oh, and Venom is super, super ugly!

But one observation outweighed the rest and, in the movie's opening week, still lurks in our brains: You can sort of understand what Hardy says.

The actor has become known in recent years for his bewildering movie accents, ranging from the unintelligible drawl of Bane in The Dark Knight Rises to the muffled exclamations of fighter pilot Farrier in Dunkirk. We can fault all the masks, or maybe nobody ever scolded him for not enunciating enough. Regardless, unusual delivery is now Hardy's trademark - so much so that it might have carried over to the "Venom" red carpet - and an oddity for which we are eternally grateful.

Here are several of his accents, ranked from least to most memorable.

We apologize in advance for bringing up This Means War, a terrible movie in which the talented lead actors - Hardy, Chris Pine and Reese Witherspoon - are wasted. We chose to include Hardy's very regular British accent as a baseline. It is probably close to his natural speaking voice and is similar to that of his Eames in 2010's Inception.

For obvious reasons, Hardy speaks with a British accent more often than not. (In 2015's Legend, he does two, one for each Kray brother.) The fact that Eddie Brock is American isn't enough to make the accent stand out, but Hardy's voice sounds strained throughout the first Venom trailer, especially at the 36-second mark: "I'm a reporter. I follow people that do not want to be followed." The intonation of his insult, "You suck," directed at Slate about 54 seconds in, is also a little off.

Hardy spends all of the riveting Locke in a car driving to London, which means his performance demands all of our attention. Hardy chose a Welsh accent for its "mellifluous gentleness."

Dunkirk includes very little dialogue, which makes it even more obvious that you cannot easily decipher what comes out of Hardy's mouth. Kenneth Branagh's Commander Bolton is loud and clear, but Farrier, the mumbling fighter pilot? Good lord. The mask and loud plane sounds, though masterfully mixed, don't help matters.

Fitzgerald is a terrifying character, and all this time in the wild seems to have made him nutty. His accent is fittingly bizarre, and the way he spits out his words makes every sentence seem like a threat. Hardy told Yahoo! that his drawl was inspired by Tom Berenger's character in Oliver Stone's 1986 film Platoon.

If Cillian Murphy and his "in-demand" blue eyes aren't enough to draw you to Peaky Blinders, then Hardy's accent might do the trick. Is it Cockney? Did he recently get his wisdom teeth removed? Did the consequential soft-food diet make him so hungry that he decided to swallow his words?

Bane may be the second-most difficult Hardy character to understand - after the Dunkirk pilot, of course - but he is hands down the most fun to imitate. Impressions of the character remain a solid party trick, years after everyone dressed up as the character for Halloween.

There isn't much to a Bane impression once you've mastered the drawl. As a Hollywood Reporter article from 2011 notes, Bane's breathing mask makes his speech come out all garbled. The one line that you can hear: "Oh, you think darkness is your ally. But you merely adopted the dark; I was born in it, molded by it."