What Real Life Hero Arjun Kapoor Did For A Fan

Arjun Kapoor's video for his fan will melt your heart 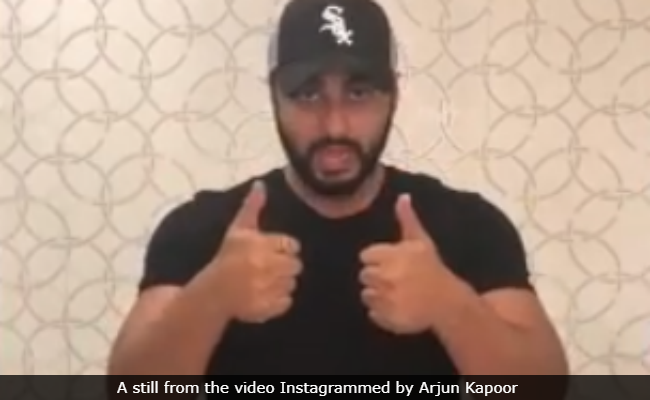 Arjun Kapoor in a still from the video.(Image courtesy: arjunkapoor )

Arjun Kapoor's video for his fan with a hearing disability will melt your heart. Arjun Kapoor recently chanced upon an email from a fan with a hearing disability, in which he had requested the actor to add subtitles to his video. Now, Arjun, who was overwhelmed by his fan's response, decided not only to add subtitles to his videos but decided to learn sign language instead. On Thursday, Arjun shared a series of videos on Instagram. The video begins with a screenshot from the fan's email and later on, Arjun can be seen thanking his fan in sign language. In another video clip, Arjun can be seen taking sign language lessons from a friend.

Arjun dedicated the video to a fan named Karen Grewal and wrote: "We actors are blessed in more ways than we realise but more so because we have wonderful fans. As much as my fan clubs and fans don't believe it, I am aware and keep track of everything that happens, what they mail me, send me, message me, tweet to me or Instagram post for me. One such email caught my attention and I just felt I had to do something about it," read an excerpt from Arjun's post.

We actors are blessed in more ways than we realise but more so because we have wonderful fans. As much as my fan clubs & fans don't believe it, I am aware n keep track of everything that happens, what they mail me, send me, msg me, tweet to me or insta post for me. One such email caught my attention & I just felt I had to do something about it... Slide right after the first video, to see the reason behind my successful attempt at this new language (forgive me if I made any unintentional mistake though) This one is for u Karen aka @_pkaur_b & I promise to keep ur wish in mind more often... lots of love hope u see this and feel happy. Big Thank u @patilprita for being so kind on such short notice and I wish u a happy married life.

On the work front, Arjun Kapoor is currently busy with the promotional duties of his upcoming film Namaste England, co-starring Parineeti Chopra. The actor also has Dibakar Banerjee's Sandeep Aur Pinky Faraar, opposite Parineeti Chopra and Ashutosh Gowarikar's period-drama Panipat in the pipeline.

Arjun Kapoor made his Bollywood debut in the 2012 film Ishaqzaade and has featured in films such as 2 States, Gunday, Finding Fanny and Half Girlfriend among others. He was last seen in the 2017 film Mubarakan.