The 78-year-old actor recently made a quick trip to Ladakh, where the temperature was low as -33 degree Celsius 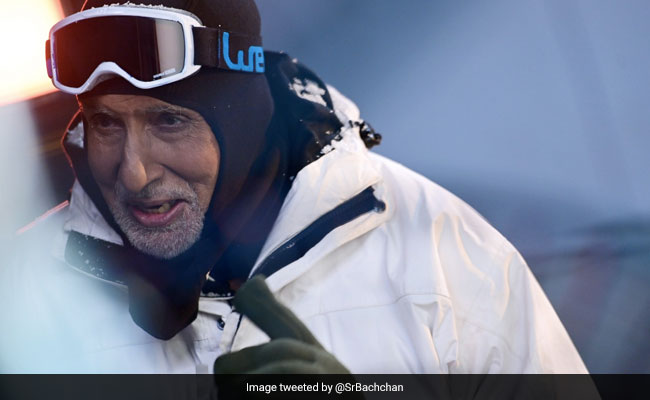 Amitabh Bachchan, who recently visited Ladakh for a commercial shoot, tweeted about his experience on Wednesday. The 78-year-old actor summed up his quick trip to Ladakh, where the temperature was low as -33 degree Celsius, with these words: "Went to Ladakh and back... minus 33 degrees." Making a reference to the picture he shared with his tweet, in which he can be seen wearing a monkey cap, winter jacket, gloves and snow goggles, Big B added: "Even this could not save me from the cold!!" Amitabh Bachchan is currently hosting the twelfth season of popular quiz show Kaun Banega Crorepati. See his aforementioned tweet here:

Amitabh Bachchan, who often engages his fans on social media with interesting tweets and throwback pictures of himself, shared an old photo of himself from the early 1990s, in which he can be seen signing autographs in Moscow, Russia. Check out the photo here:

Earlier, Amitabh Bachchan posted a vintage picture of himself replicating legend Michael Jackson - a task at which he failed (his words, not ours). The photo is from the sets of Amitabh Bachchan's 1988 film Gangaa Jamunaa Saraswathi, directed by Manmohan Desai. Sharing the picture, Big B wrote: "When Manmohan Desai thought that I could replicate MJ in our film Gangaa Jamunaa Saraswathi. What a failure I was."

Amitabh Bachchan was last seen in Shoojit Sircar's Gulabo Sitabo. The actor has a couple of films lined up. He will co-star with Ranbir Kapoor and Alia Bhatt in Ayan Mukerji's Brahmastra, with Emraan Hashmi in Chehre and with Ajay Devgn and Rakul Preet Singh in Mayday.