"You made a mother out of me way before I had my kids," wrote Farah 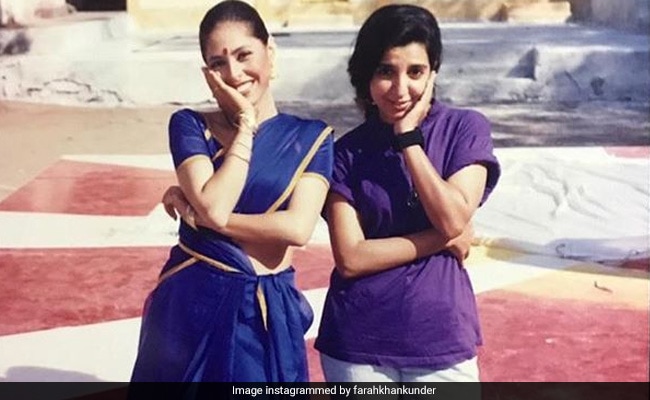 Filmmaker Farah Khan wished her friend and choreographer Geeta Kapur in the sweetest way possible on social media on Sunday. Farah, who is also a renowned Bollywood choreographer, made a trip down memory lane and picked a priceless throwback picture of herself and Geeta from the time when they were too young. The picture was taken before the duo went through body transformation, an ROFL reference to which Farah also made in her birthday post. She wrote: "We have literally been through 'thick & thin' together! Fevicol got nothing on us! Happy birthday Geeta Kapur .. You made a mother out of me way before I had my kids.. love you, baby." In her post, Farah also stated that the picture was clicked at Chandivali Studio in Mumbai.

We have literally been through "Thick & THIN" together! Fevicol got nothing on us! HAPPY BIRTHDAY @geeta_kapurofficial .. u made a mother out of me wayyyyy b4 i had my kids.. lov u baby #majorthrowback #life #chandivalistudio

Reacting to Farah Khan's post, actress Sonam Kapoor revealed that her "first song" was choreographed by Geeta Kapur. She wrote: "Love you both... she choreographed my first song.. happy birthday, Geeta Kapur." Sonam's father Anil Kapoor also dropped a comment that read: "Both of you look so good .. and sexy."

For those who don't know, Geeta Kapur had started her dance career with Farah Khan's group but due to some family crisis, she left the group and started choreographing dance sequences.

Farah Khan is also a renowned director and producer. She made her directorial debut with the 2004 film Main Hoon Na. She has also directed films like Om Shanti Om, Tees Maar Khan and Happy New Year.Her last production venture was Netflix's Mrs Serial Killer, which starred Jacqueline Fernandez and Manoj Bajpayee. The film was directed by Farah's husband Shirish Kunder.