We Love The "Vibe" Of This Pic Shared By Shibani Dandekar

Just a picture of Shibani Dandekar being her stunning self 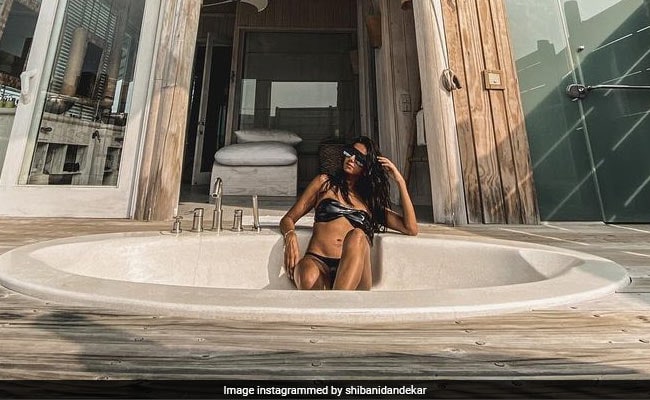 Shibani Dandekar shared a stunning picture of herself on her Instagram profile on Wednesday. The picture has a holiday vibe about it, which we simply love. The actress, dressed in a black bikini, can be seen chilling in a pool of sorts. Shibani can be seen wearing a pair of sunglasses. The actress' swag is just off the charts in the picture. Not to mention the stunning location in the backdrop. The picture appears to be Shibani's recent Maldives vacation, where she was accompanied by her boyfriend Farhan Akhtar and his daughter Akira. Shibani simply captioned the post "vibe." The post, no points for guessing, was replete with heart and fire emojis. Shibani has actively been sharing pictures on Instagram. Some posts feature her favourite snacks, while others are about her and her boyfriend Farhan Akhtar's social media PDA.

On Tuesday, Shibani Dandekar shared a picture of herself along with Farhan Akhtar's daughter Akira and she captioned it: "To be steady in the soul and free in spirit." Shibani also posted a picture with Farhan and she wrote: "My happy place." Check out the posts here:

The actress celebrated her 40th birthday in August this year. She received some super cute birthday greetings from her boyfriend Farhan Akhtar. "You'll always have my shoulder to lean on. Happy birthday. Love you," wrote Farhan Akhtar.