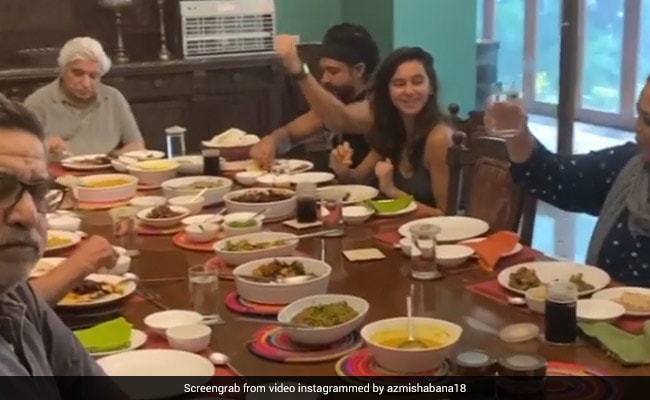 We recently got a glimpse of Farhan Akhtar and Shibani Dandekar's fam-jam with Shabana Azmi and Javed Akhar on Instagram. Farhan is the son of veteran lyricist Javed Akhtar and his former wife Honey Irani. He later got married to actress Shabana Azmi. On Sunday, which was Father's Day, Ms Azmi shared an adorable video of the how catching up with family usually looks like, revealing the one thing that her family is crazy about - food. "When with family, it's always about food," she captioned her Instagram video, which took us inside her family lunch with Farhan, Shibani, Javed Akhtar, Shabana's brother Baba Azmi, his wife Tanvi Azmi and others. In the video, an enthusiastic Farhan can be seen waving at the camera as Shabana pans it across the room and making us drool with glimpses of the delicious lunch spread on the table.

When with family its always about food !

Meanwhile, Farhan also dedicated this post to Javed Akhtar on Father's Day - it's a beautiful poem written by Javed Akhtar himself.

In January this year, Shabana Azmi was heavily injured in a car accident on the Mumbai-Pune Expressway in Maharashtra's Raigad district in the afternoon. Javed Akhtar, who was also in the car but did not suffer injuries, shared updates about Shabana Azmi's recovery in several tweets. Shabana Azmi resumed her social media activities in March.

Earlier this month, Farhan and Shibani trended a great deal for reports about their rumoured wedding. It was reported that the couple were planning a wedding ceremony by the end of this year, sometime after Farhan's film Toofan releases. It's scheduled for October 2. They were reportedly all set to get married before Toofan with a formal ceremony only after the film's release.

In March last year, Farhan Akhtar and Shibani Dandekar trended a great deal for posting a photo of their ring-adorned hands. The Internet concluded that Shibani and Farhan were engaged.