Shibani Dandekar, on Sunday, shared a video of herself performing Amy Winehouse's song Back To Black on a piano 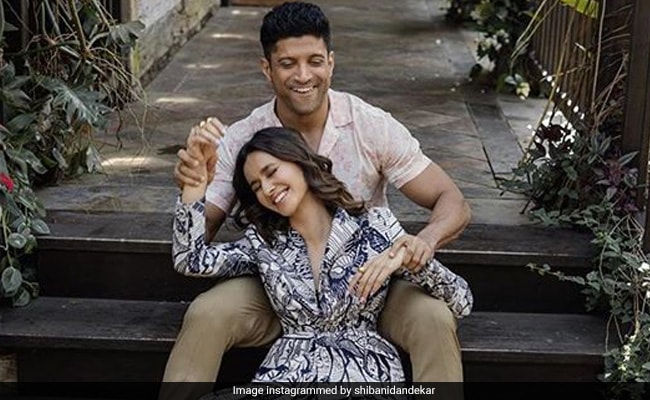 Farhan Akhtar and Shibani Dandekar, who every now and then, set couple goals on social media, did something similar on Sunday. In case you are wondering what are we talking about, here's what happened. Shibani Dandekar, on Sunday, shared a video of herself performing Amy Winehouse's song Back To Black on keyboarpiano. She can be seen singing the track while playing the instrument in the clip. Reacting to the video, Farhan left an adorable comment, in which he was all praise for her. He wrote "awesome" in the comments section. Aren't they the cutest? First, check out Shibani Dandekar's latest video here:

Sunday tunes.. hope y'all have a lovely day #thatbrowngirl #amywinehouseforever

And here's what Farhan Akhtar commented:

Earlier, during the nationwide lockdown, Farhan Akhtar lived with Shibani Dandekar and his daughters in Mumbai. The actor was previously married to celebrity hairstylist Adhuna Bhabani, with whom he has two daughters - Shakya and Akira. The duo officially ended their marriage in April 2017.

In one of her previous posts, Shibani Dandekar gave us a glimpse of her in-house jam session with Farhan, where the duo can be seen performing the cover of Shallow from Lady Gaga and Bradley Cooper's A Star Is Born. Take a look at the post here:

In terms of work, Farhan Akhtar was last seen in Shonali Bose's The Sky Is Pink, in which he co-starred with Priyanka Chopra, Zaira Wasim and Rohit Saraf. His next release is sports drama Toofan, directed by Rakeysh Omprakash Mehra. The film will be co-produced by Ritesh Sidhwani, Farhan Akhtar and Rakeysh Omprakash Mehra and it will also feature Paresh Rawal in a pivotal role.