In Shibani Dandekar's Vacation Pic, A Bag Of Cheetos Steal The Show

In the photo, Shibani can be seen chilling on the bed with a bag of Cheetos while enjoying a gorgeous view of the sea and the setting sun 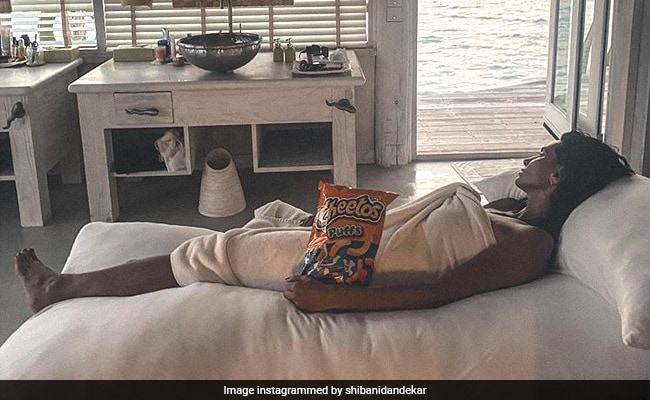 Actress-model Shibani Dandekar gave us major wanderlust as she shared a glimpse of the view she is enjoying these days. Shibani simply wanted to post about a few of her "favourite things" and she found just the perfect photo in a vacation memory. "A few of my favourite things," Shibani captioned a photo of herself, in which she can be seen wrapped in a resort towel, chilling on the bed with a bag of Cheetos while enjoying a gorgeous view of the sea and the setting sun. The cheese puffs particularly intrigued netizens, who unanimously agreed that munching Cheetos on a vacation is just the perfect way to unwind. "Packed the essentials I see," commented a friend of Shibani's while another added: "What a fun combo - sun, sea and Cheetos."

A few of my favourite things 🧡 #thatbrowngirl

Earlier, Shibani Dandekar had shared several glimpses from her Maldives getaway. "Was it all a dream?" she captioned one of them while with another, she revealed her "favourite reading spot."

one of my favourite reading spots 🏝

Shibani Dandekar is dating actor Farhan Akhtar and often trend for their loved-up posts on social media. Shibani, a popular face in the Indian television industry, became a household name after she started hosting the Indian Premier League. She has participated in reality shows such as Khatron Ke Khiladi and Jhalak Dikhla Jaa. Shibani was last seen in the second season of Amazon Prime's web-series Four More Shots Please! Season 2. She's appeared in films such as Bhavesh Joshi, Shaandaar, Roy and Naam Shabana.