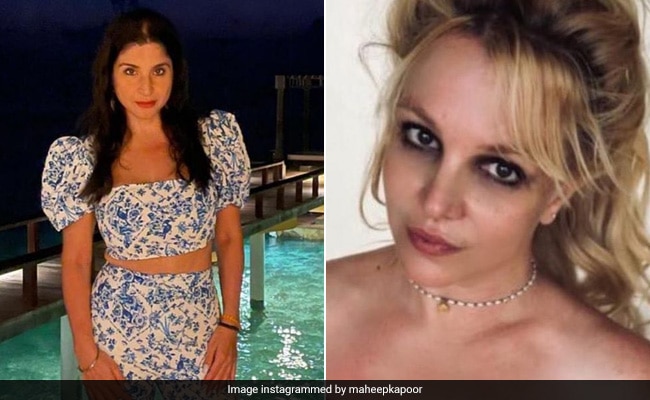 Maheep Kapoor shared a "who wore it better" post on Instagram on Wednesday morning. The jewelry designer, shared a picture collage that features a picture of her, juxtaposed with that of Britney Spears - both the ladies can be seen dressed in a similar outfit with floral prints. While we were having a tough time deciding who our pick would be, Maheep Kapoor made the job a little easy by answering for herself. She is on "Team Britney" (her words). Sharing the collage on Instagram, Maheep Kapoor wrote: "Oh hey Britney." She added the hashtags #YouWoreItBetter, #TeamBritney and #Queen to her post.

An excited Maheep Kapoor, earlier this week, announced the big news of her daughter Shanaya Kapoor's Bollywood debut. "With her unabashed enthusiasm, resilience and sparkle - My girl is all set to take over your screens soon. Give her your love and blessings as she is ready to start the journey of her first film with Dharma Movies this July," she wrote.

Also, Maheep Kapoor has been making Maldives look so fabulous. Maheep, holidaying in the island nation with her best friend and designer Seema Khan, has actively been sharing posts from her holiday diaries. Take a look already:

Maheep Kapoor, married to actor Sanjay Kapoor, became a star after she featured in Netflix's smash hit The Fabulous Lives of Bollywood Wives. The show was based on the lives of four star-wives including Bhavana Pandey (wife of Chunky Pandey) and Neelam Kothari (married to Samir Soni), Seema Khan (Sohail Khan's wife) and Maheep.