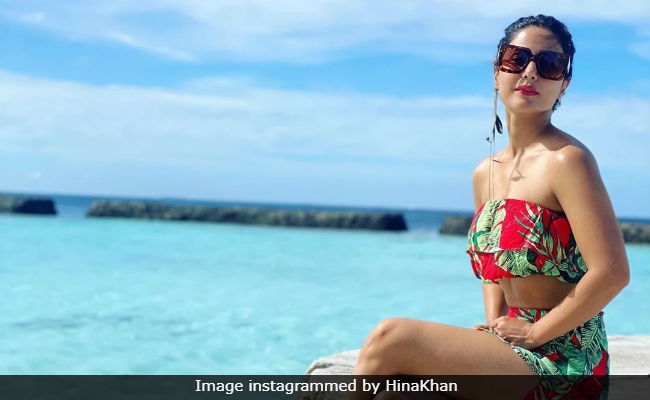 Hina Khan is having the time of her life in Maldives and the latest set of pictures shared by the actress are proof. The 32-year-old actress shared a series of stunning pictures on her Instagram profile, in which she can be seen chilling by the pool, dressed in a printed swimsuit. Hina can be seen wearing a hat and a pair pf oversized glasses. Hina captioned the post: "There is no heaven on earth but there are pieces of it. My kinda happy place.. Meet me here in Maldives." She added the hashtags #BeachLife #FloatingBreakfast #WaterBaby to her post.

There is no Heaven on earth buttt there are pieces of it.. @kurumba_maldives My Kinda happy place.. Meet me here in #MaldivianBlues #BeachLife #FloatingBreakfast #WaterBaby

On the work front, the Yeh Rishta Kya Kehlata Hai actress recently featured in a music video titled Raanjhana, which also starred her fellow Bigg Boss contestant and friend Priyank Sharma. Hina shared pictures from the song's promotion diaries on Instagram. "We are madness. Raanjhana promotions," she captioned the post. This is the post we are talking about:

Hina Khan became a household name after she featured as Akshara in the popular television show Yeh Rishta Kya Kehlata Hai. She also participated in television reality shows like Khatron Ke Khiladi season 8 and Bigg Boss 11. Hina Khan was also a part of Kasautii Zindagii Kay 2, in which she played the antagonist Komolika. However, she quit the show after a few months. The actress stepped into films with Lines, the poster of which was unveiled at the 72nd Cannes Film Festival in May this year.