One figure who stands out appears to be Deepika, who can be seen dressed in an orange and golden hued saree 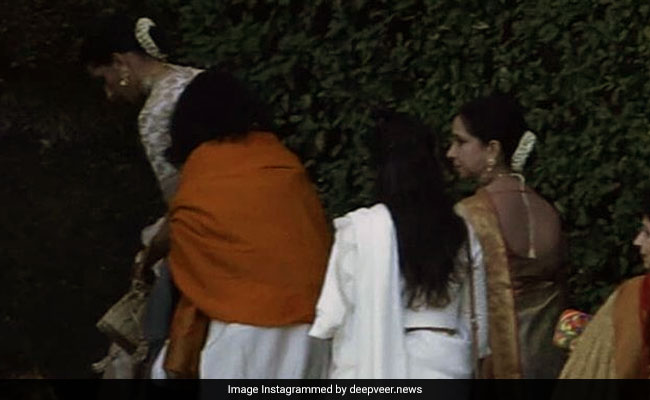 Deepika Padukone and Ranveer Singh's wedding in accordance with South India rituals concluded on Wednesday morning in Italy's Lake Como. While no photos have yet been shared by the couple on social media, a video tweeted by news agency ANI offers visuals from Deepika and Ranveer's wedding venue Villa del Balbianello, which is placed on the tip of a peninsula on Lake Como. In the video, both ladkiwale and ladkewale can be seen escorting the newly-married couple down a flight of stairs leading to the boats stationed at the private harbour. While the wedding guests, including friends and family members, can mostly be seen wearing white and gold, one figure who stands out appears to be Deepika, who can be seen dressed in an orange and golden hued saree.

Close at her heels appeared to be the groom, who was also in white. Both Deepika and Ranveer appeared to hide behind huge umbrellas as they exited Villa del Balbianello. Watch the full video here:

Meanwhile, fan clubs have curated some glimpses from inside the much talked about Deepika-Ranveer wedding.

#when you have waited for #deepveer #wedding #pics for too longgggg

Meanwhile festivities are in full swing in Italy. A second wedding as per North Indian traditions is scheduled for Thursday. An engagement party reportedly happened last night while Deepika and Ranveer also said to have enjoyed sangeet and mehendi ceremonies. Deepika and Ranveer have planned for two reception parties after the wedding festivities in Italy - one in Deepika's hometown Bengaluru on November 21 and a grand Bollywood party in Mumbai on November 28.