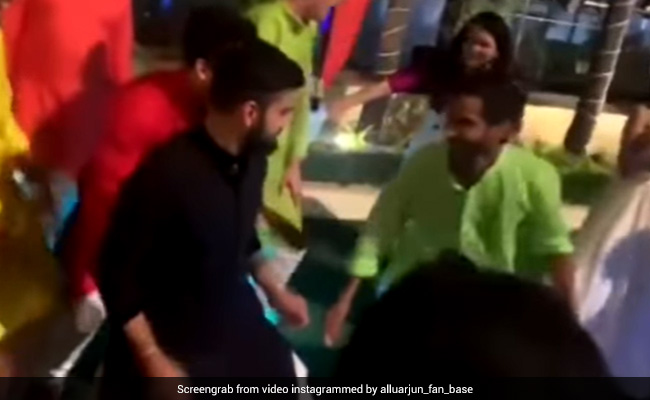 Virat Kohli and Anushka Sharma recently attended cricketer Glenn Maxwell's wedding bash and a dance video of the former Indian skipper has gone viral on the web. In the video, Virat is seen dancing to Allu Arjun and Samantha Ruth Prabhu's Oo Antava from Pushpa: The Rise. Dressed in a black kurta, Virat Kohli is seen matching his dance steps with fellow cricketers. For the uninitiated, Glenn Maxwell married his longtime girlfriend Vini Ramani just before the Indian Premier League (IPL). The video has been shared by many fan pages.

On Thursday, Anushka Sharma shared photos from Glenn Maxwell's wedding bash. For the party, Anushka was dressed in a gorgeous pink suit and Virat Kohli looked handsome in a black kurta. Sharing the photos, Anushka wrote, "Wedding function in a bubble! Now I think I've seen and celebrated possibly every function and festival in a bubble! #BubbleLife."

Virat Kohli and Anushka Sharma got married in December 2017 and in January 2021, they welcomed their first child, a daughter, and named her Vamika. The couple is yet to share an official full photo of Vamika on social media.

On Virat Kohli's birthday, Anushka Sharma had wished him by writing a sweet note. Her note had read, "No filter needed, for this photo and the way you lead your life. Your core is made of honesty and guts of steel. Courage that pales doubt into oblivion. I know no one who can pick themselves up from a dark place like you can. You grow better in every way because you hold on to nothing in you as permanent and are fearless. I know we are not ones to talk to each other through social media like this but sometimes I just want to scream and tell the world what an amazing man you are Fortunate are those who really truly know you. Thank you for making everything brighter and more beautiful. Oh, and Happy Birthday cuteness!"

On the work front, Anushka Sharma will next be seen in Chakda Xpress, based on the life of Jhulan Goswami.