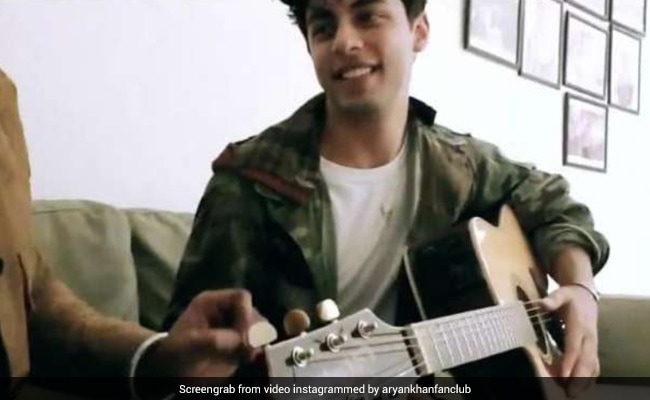 Shah Rukh Khan and Gauri's eldest son Aryan Khan occupied a spot on the list of trends on Tuesday after a video of him singing Charlie Puth's Attention surfaced on the Internet. The video is going crazy viral on social media with several fan clubs resharing it on their respective profile and we are not at all surprised because the clip is a perfect example of Aryan Khan's amazing singing skills. It features Aryan Khan, dressed in a white t-shirt and camouflage jacket, playing guitar and singing Attention with a friend. Aryan's voice in the viral clip has left his fans in awe.

Another video of Aryan singing with a friend has been shared by the same fan club on their Instagram profile. Take a look at that too:

Aryan Khan celebrated his 22nd birthday in November. He often trends on social media for his pictures with parents Shah Rukh Khan and Gauri, as well as with sister Suhana. When the actor and his family flew to Dubai for the Indian Premier League, Suhana used to share glimpses of her parties with Aryan and cousin Alia Chhiba almost every other day. We have picked a few for you, take a look:

Aryan Khan fans want him to join Bollywood but he has some other plans. Last year, during an episode of My Next Guest Needs No Introduction With David Letterman, Shah Rukh Khan said: "Aryan doesn't have what it takes to be an actor and he realises that too but he's a good writer. I think wanting to be an actor has to come from within. Something you really need to do and find a set of skill that helps you do it and learn it. But I think I realised it from him when he said that to me. He came to me and said, 'I don't think I want to act'."

Suhana Khan and Aryan are pursuing their higher studies abroad. They both returned to India earlier this year because of the coronavirus pandemic.