This video of AbRam's dance will drive away your Monday blues 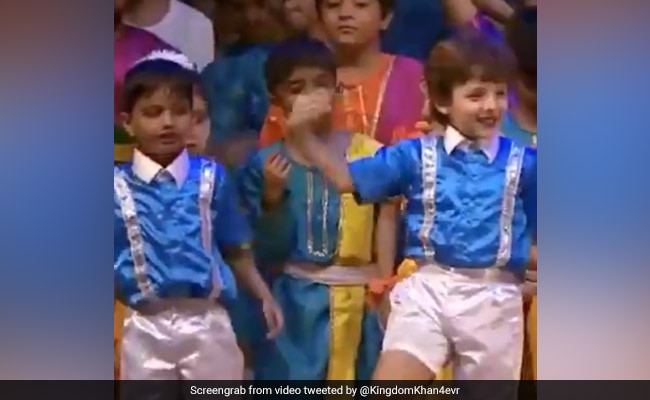 AbRam in a still from the video. (Image courtesy: KingdomKhan4evr )

Shah Rukh Khan's 6-year-old son AbRam took the top spot on the trends list on Monday, courtesy a viral video, in which he can be seen dancing at his school's annual day event. Dressed in a blue shirt, white shorts and suspenders, AbRam can be seen dancing in the video. We also got a glimpse of Shah Rukh Khan dancing at the event. The video was shared by a fan club dedicated to the actor on social media. Over the weekend, SRK was photographed outside Dhirubhai Ambani International School in Mumbai, where AbRam studies.

The little kids are amazing! The big kid is just too precious #ShahRukhKhanpic.twitter.com/XDFtNazcUE

Meanwhile, Aishwarya Rai Bachchan and Abhishek Bachchan's daughter Aaradhya also trended for her performance at her school's annual day event. Big B shared a snippet of his granddaughter Aaradhya's performance at her school's annual day event and tweeted: "The proudest moment and voice.... Of the girl child, of Aaradhya, my own." In the video, Aaradhya, dressed in a saree, can be seen giving a powerful speech on women empowerment.

the proudest moment and voice .. of the girl child .. of Aaradhya , my own .. https://t.co/Gsa9gBIgBA

Other than AbRam, Shah Rukh Khan and Gauri Khan are also parents to daughter Suhana and son Aryan.