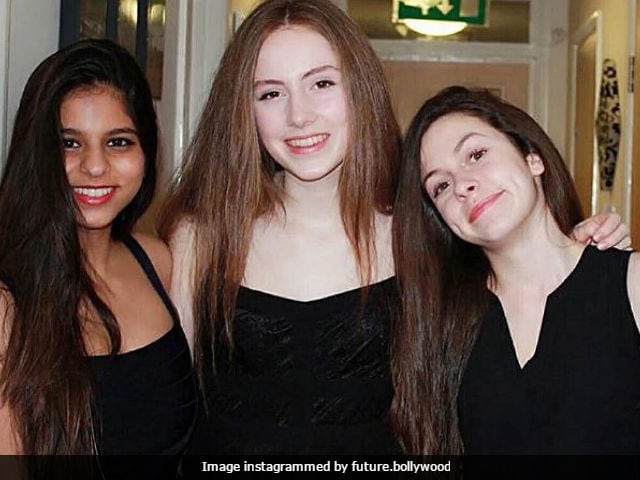 New Delhi: Photos of actor Shah Rukh Khan's teen daughter Suhana with her squad at a party are going viral. Fan clubs have shared pictures of Suhana's recent night out on social media in which she poses with her friends, wearing a big smile and looking like she's having a great time. Suhana wore an LBD and kept her look simple, with her hair down (literally). It seems Suhana Khan, 16, was the life and soul of the party. Suhana is a student of Mumbai's Dhirubhai Ambani International School and is reportedly planning to go to college abroad like her elder brother Aryan, who recently graduated from the London-based Sevenoaks School and is currently studying film at the University of Southern California. Here are some pictures of Suhana and friends at the party:

Suhana Khan reportedly wants to follow in the famous footsteps of her father and already has a strong interest in theatre. Recently, video footage of her in a school play went viral. Suhana was cast as Cinderella in a revamped version of the fairytale, where the protagonist was an assertive young woman rather than a damsel in distress. The internet loved Suhana. Here's a glimpse of her performance.

Shah Rukh Khan, still one of Bollywood's busiest actors at 51, has said that his children are at liberty to choose their careers. Of Suhana's acting ambition, Shah Rukh Khan told Femina in an interview: "She can be an actor if she has the passion and guts to work five times harder than me and get paid 10 times less than I do, if times don't change for women actors." He added: "I have only one mandate where she's concerned: she can act, but she has to study first."

Promoted
Listen to the latest songs, only on JioSaavn.com
SRK is married to Gauri Khan, an interior decorator, and they have three children - sons Aryan, 19, and AbRam, who will be four-years-old in May, and daughter Suhana.

Shah Rukh Khan was last seen in January release Raaes and his next is Imtiaz Ali's yet-untitled project, co-starring Anushka Sharma. The film is expected to release in August.