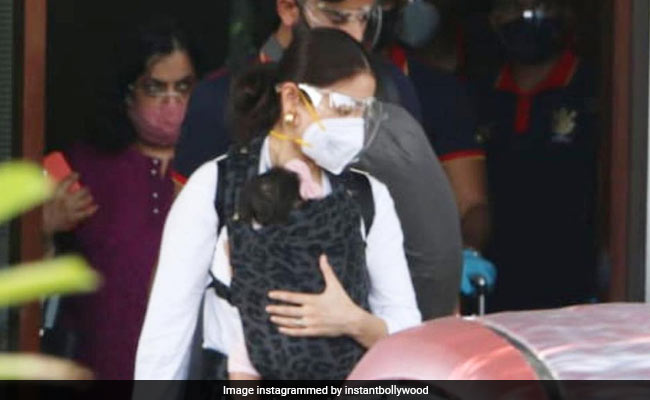 Anushka Sharma and Virat Kohli, who became parents in January, were spotted at Mumbai's Kalina airport on Monday evening - the actress was spotted carrying baby daughter Vamika. Virat Kohli, along with his IPL team Royal Challengers Bangalore, flew into Mumbai after Sunday's match in Chennai. Royal Challengers Bangalore won Sunday's match against Kolkata Knight Rider by 38 runs. Virat Kohli checked into Mumbai for RCB's next IPL match, which is scheduled for April 22, to be held at Mumbai's Wankhede Stadium. Anushka and Virat were photographed while exiting Kalina airport and taking off in their car - baby Vamika was being carried by Anushka while Virat lead the way. Photos of the star couple along with their baby daughter have been shared on social media and gone crazy viral.

The star couple, after the baby's birth, had requested the paparazzi to not click photos of baby Vamika. At the airport on Monday, Anushka carefully appeared to shield Vamika from the popping flashlights.

Earlier in March, a video of Anushka and Virat along with baby Vamika, and cricketer Hardik Pandya, his wife, model-actress Natasa Stankovic, and their baby son Agastya, exiting the Pune airport, trended for days. Virat Kohli was accompanied by Anushka and baby Vamika to Pune for the Test matches.

After returning from Pune, Anushka Sharma was spotted on the sets of a brand endorsement in Mumbai. In terms of films, Anushka Sharma was last seen in 2018 movie Zero, after which she produced OTT projects such as Paatal Lok and Bulbbul. Anushka's next production Qala, a Netflix original movie, will mark Irrfan Khan's son Babil's acting debut.