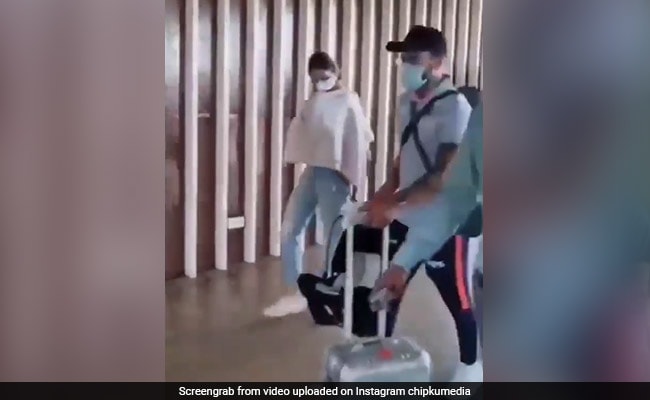 Anusha-Virat with Vamika in a still from a fan page. (Image courtesy: Instagram)

Virat Kohli flew to Pune on Sunday with wife, actress Anushka Sharma, and their little daughter Vamika for the three ODI matches which are scheduled against England. Pictures and videos of the couple with their little munchkin from the airport have now gone viral on social media and in some of the clips, we can also see cricketer Hardik Pandya, his wife, model-actress Natasa Stankovic, and their baby son Agastya. In one of the videos, Hardik Pandya can be seen carrying Agastya in a baby carrier with Natasa walking beside him. Within a minute, Anushka Sharma can be seen holding baby Vamika in her arms and walking side-by-side with Virat Kohli, who can be seen holding their luggage.

Another picture of Anushka Sharma and Virat Kohli is doing the rounds on the Internet. The photo features Anushka looking at her baby while holding the little munchkin in her arms and Virat walking behind them carrying the luggage. The photo won the hearts of the fans, courtesy Virat and Anushka's simplicity. Check it out here

Anushka Sharma and Virat Kohli welcomed Vamika on January 11 this year. Few days after the birth of their baby girl, the couple shared this family photo to announce her name: "We have lived together with love, presence and gratitude as a way of life but this little one, Vamika has taken it to a whole new level! Tears, laughter, worry, bliss - emotions that have been experienced in a span of minutes sometimes! Sleep is elusive but our hearts are SO full. Thanking you all for your wishes , prayers and good energy."

Anushka and Virat dated for several years before marrying in a lavish ceremony in Italy in 2017.