During the video call, Kamal Haasan described Saketh and his family members as "fighters" 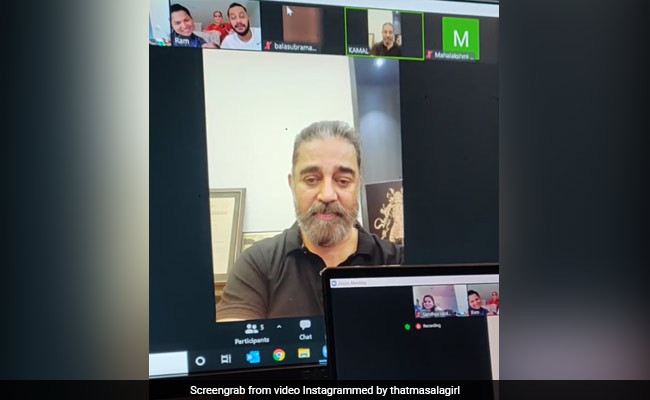 Kamal Haasan in a still from Zoom video (courtesy thatmasalagirl)

"Kamal Haasan, you are a legend," wrote Sandhya Vaidyanathan, an artist-illustrator who managed to rope in the megastar for a Zoom call with a fan, who is battling cancer. In a few recent Instagram posts, Sandhya revealed that Kamal Haasan surprised a fan named Saketh by interacting with him on a Zoom call and it was the most "magical" experience ever. Kamal Haasan's fan Saketh is battling brain cancer and getting to meet Kamal Haasan was on his wish list for the longest time. Looks like Kamal Haasan just made it come true. Glimpses of the Zoom call session have been shared by Sandhya Vaidyanathan on her Instagram. "Saketh's wish was to see Kamal Haasan and this happened. I'm so grateful to the team from his office," she wrote.

During the video call, Kamal Haasan described Saketh and his family members as "fighters". In an emotional moment, Saketh's wife breaks down during the conversation with Kamal Haasan.

In terms of work, Kamal Haasan was last seen in 2019 movie Kadaram Kondan. His impressive list of upcoming films include Vikram - he made the announcement on his 66th birthday last year. Vikram is also the title of Kamal Haasan's 1986 movie, in which he played the eponymous character. Vikram was slated to release in the summer of 2021 but the pandemic situation appears to have delayed the schedule. Kamal Haasan is also expected to resume the shooting schedule of his much anticipated film Indian 2.