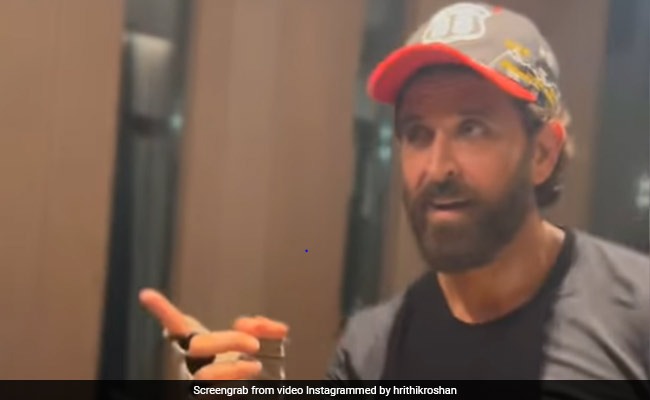 Hrithik Roshan in a still from the clip. (Image courtesy: hrithikroshan )

Every moment with Hrithik Roshan, either on set or in the gym, is fun. The actor, on Saturday, shared a couple of videos of himself dancing to some peppy '80s songs in the gym with his friends and trainer. His post has won the hearts of his co-stars and his fans on Instagram and you will know after watching those videos. The first clip features Hrithik doing garba to the track Pardesia from the 1979 film Mr Natwarlal across the gym room. "Garba, dandiya," someone in the background can be heard saying, after which Hrithik Roshan hilariously replies: "Navratri hai re." The other videos are as awesome as the actor as they feature him dancing to the beats of Jimmy Jimmy Aaja Aaja and Jaanu Meri Jaan, respectively.

In no time, Hrithik Roshan went viral on social media. Check it out here:

Hrithik Roshan has featured in several hits such as Krrish, Dhoom 2, Jodha Akbar, Zindagi Na Milegi Dobara, Guzaarish, Agneepath, Kaabil, Bang Bang!, Kites and Super 30. He was last seen in the blockbuster hit War, co-starring Tiger Shroff and Vaani Kapoor. Hrithik Roshan will next be seen alongside Deepika Padukone in a film titled Fighter. The film marks the duo's first project together.

The actor has also begun shooting for the Hindi remake of Tamil film Vikram Vedha. Here's the update he shared about the film on Saturday:

Hrithik Roshan was married to interior designer Sussanne Khan. They have two sons. Hrithik and Sussanne are divorced now but they are still good friends.