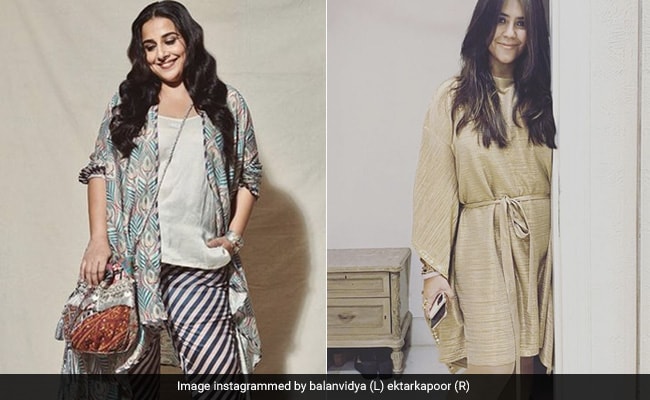 The Academy of Motion Picture Arts and Sciences revealed the long list of new members, who have been invited to joined the prestigious film body and a few names in particular caught our attention. Actress Vidya Balan and TV czarina Ekta Kapoor are among the new list of invitees of the Academy's "Class Of 2021." Vidya Balan, Ekta Kapoor and her mother Shobha Kapoor, also a producer, are among the 395 new members from across 50 countries, who have been invited to join the Academy of Motion Picture Arts and Sciences this year. The "Class Of 2021" comprises 46 percent new women invitees, 53 percent 39% members of ethnic representation and 53 percent of international members from 49 countries other than USA.

The Academy recognizes Vidya Balan for some of her best known films such as the 2012 mystery thriller Kahaani and 2017 family drama Tumhari Sulu. Vidya Balan's impressive resume as an actress includes films such as Paa, Bhool Bhulaiyaa, Parineeta, Bobby Jasoos, Shakuntala Devi , among others. She won the Best Actress National Film Award for her performance in the 2011 movie The Dirty Picture.

Meanwhile, producers Ekta Kapoor and her mother Shobha Kapoor, who own the production house Balaji Telefilms, have been recognized by the Academy for backing films such as Dream Girl, Once Upon A Time In Mumbai, Udta Punjab and Vidya Balan's The Dirty Picture.

The list of actors who received invites from the Academy also include Andra Day, Vanessa Kirby, Robert Pattinson and Yuh-Jung Youn, among others. The list of Academy's new members also includes as many as 89 previously Oscar-nominated names, out of which 25 of them are Oscar-winners.

It's time to announce our new members! Meet the Class of 2021. https://t.co/17gbIEXOzJ#WeAreTheAcademy

Last year, stars such as Alia Bhatt and Hrithik Roshan were invited to become new members of the Academy of Motion Picture Arts and Sciences as part of a list comprising 819 names. The 94th Academy Awards are expected to be held on March 27 next year.