Vicky Kaushal's Bhoot: Part One - The Haunted Ship Teaser: Ready For Some Goosebumps?

Vicky Kaushal and Bhumi Pednekar star in Bhoot: Part One - The Haunted Ship 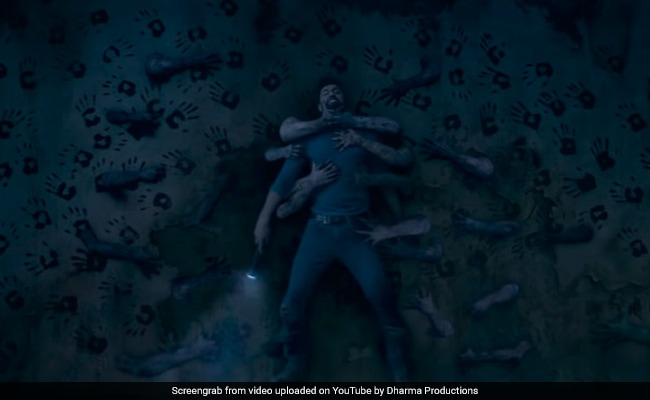 A still from the teaser of Bhoot: Part One. (courtesy: YouTube)

Bhoot: Part One - The Haunted Ship's teaser released on Friday. The film is a horror-thriller featuring Vicky Kaushal and Bhumi Pednekar. In Bhoot: Part One's teaser Vicky Kaushal has a terrified expression as he enters a dingy lobby on an abandoned ship. The actor follows a trail of blood-stained hand prints with the help of a torch. The moment he steps into a room, Vicky Kaushal discovers a wall full of similar blood-stained prints. To his surprise, he also discovers a painting of his own face, made by blood stains which leaves him startled. In the climax of the teaser, Vicky Kaushal is grabbed by the hands of several bhoot-like characters and is pulled into the wall. The teaser will leave the viewers wanting for more.

Vicky Kaushal has also shared the teaser on Instagram on which actress Taapsee Pannu has left a comment saying, "I will make sure you watch all horror movies inside a dark room sitting alone if you are going to make all of us watch this! What the hell!" The 31-year-old actor has replied, "See you at the screening," to which Taapsee said, "You really have to think of a really really good trick to pull me in for this one!"

Bhoot: Part One is directed by Bhanu Pratap Singh. Karan Johar, Apoorva Mehta and Shashank Khaitan have jointly produced the film. In a recent tweet by Karan Johar-led Dharma Productions, they have disclosed the release date of Bhoot: Part One's trailer. It will be out on Monday.

Come face to face...with your fears. #Bhoot Trailer out on MONDAY. #BhootTrailer3rdFeb#TheHauntedShiphttps://t.co/20BM233hNw@karanjohar@apoorvamehta18@vickykaushal09@bhumipednekar@Bps_91@ShashankKhaitan@NotSoSnob@ZeeStudios_@ZeeMusicCompany

Bhoot: Part One - The Haunted Ship is slated to release on February 21. On the work front, Vicky Kaushal is working on his next film Takht by Karan Johar. He will also feature in a biopic on Field Marshal Sam Manekshaw and Sardar Udham Singh in a titular role.