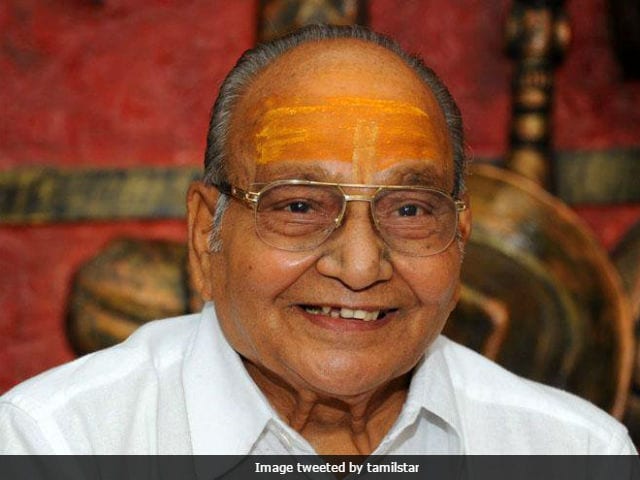 New Delhi: Veteran filmmaker and actor Kasinathuni Viswanath has been announced as the recipient of the Dadasaheb Phalke Award for 2016 for his contribution to Indian cinema, reports news agency IANS. On Monday, Union Information and Broadcasting Minister M Venkaiah Naidu approved the recommendation of the Dadasaheb Phalke Award committee. Kasinathuni Viswanath will receive the award from President Pranab Mukherjee on May 3 in New Delhi. The award includes a cash prize of Rs 10 lakh, a Swarn Kamal (Golden Lotus) and a shawl. Kasinathuni Viswanath, who has directed over 50 films, is a recipient of five National Film Awards, six state Nandi Awards, ten Filmfare Awards.

Actor Kamal Haasan, who co-starred with Mr Viswanath in Telugu film Subha Sankalpam, congratulated the 87-year-old filmmaker on being conferred with the Dadasaheb Phalke Award. In his tweet, the 62-year-old actor wrote: "My K.Vishwanath gaaru is a Dada Saheb Palke award winner. In his humility he would say "I am lucky". Truth is Indians are lucky. So am I."

My K.Vishwanath gaaru is a Dada Saheb Palke award winner. In his humility he would say " I am lucky" .Truth is Indians are lucky. So am I

Thank u with glistening eyes Vishwanath gaaru for Sagara sangamam. Like Balu of S.S I initiate more applause. Your fame is mine vice versa

Compliments to 'Kalatapasvi' K. Viswanath for being conferred Dadasaheb Phalke Award for 2016...

Congrats to veteran filmmaker & actor K Viswanath for winning the Dadasaheb Phalke Award. His classics like Sankarabharanam are timeless.

Kasinathuni Viswanath started his career as a technician in Chennai. He later assisted filmmaker Adurthi Subba Rao in direction. Kasinathuni Viswanath debuted as a director with Aatma Gowravam starring Akkineni Nageswara Rao. The film won the Nandi Award for Best Feature Film of the year.

Promoted
Listen to the latest songs, only on JioSaavn.com
Kasinathuni Viswanath's film Swati Mutyam (The White Pearl) was India's official entry to the Academy Awards in the Best Foreign Film category in 1987.