"...Being all grown up now... I miss being in your godi," Varun Sharma wrote 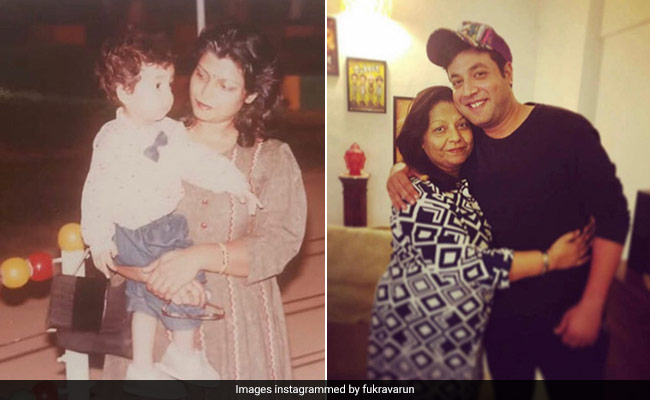 Varun Sharma, who was recently seen in the film Roohi, is celebrating his mom's birthday today. The actor wished his mom a happy birthday by sharing two pictures with her on Instagram. The series features a childhood photo of Varun with his mom in which she can be seen holding him in her arms. Varun as a child looks super cute in white shirt, blue shorts, and a bowtie. The second picture, which was clicked years later, shows Varun hugging his mom, as both of them flash their million-dollar smiles. The Fukrey actor also wrote a heartwarming caption along with the pictures.

Going by his caption, it is evident that Varun is missing his childhood. He wrote, "Happy happpyy Birthday Mumma. You mean Everything to me! Thank you for always being there.. Being all grown up now.. I miss being in your godi. See his post here:

Actors Pulkit Samrat and Manjot Singh noticed the post and wished his mom a happy birthday in the comment section. Both of them were Varun's co-stars in the Fukrey series. Sonakshi Sinha, who worked with Varun in the film Khaandaani Shafakhana also wished her on the occasion.

Varun keeps sharing pictures of his mom on Instagram. On March 8 (International Women's Day), the actor had posted a picture with his mom, as he wished her on the occasion. The photo also featured his sister. Varun had written, "#HappyWomensDay to the leading ladies of my life, my pillars, and constant support systems. Thank you Maa and Didi for all that you are and for all that I am today #InternationalWomensDay #IWD2021 #OnlyLove."

Varun also shared a picture of his mom with Shah Rukh Khan and called it "special". Varun had posted the photo on SRK's birthday (November 2) last year. He wrote, "This is the most Special Picture for me. The Man who Inspired me to become an Actor.. and The Woman who supported me and gave me Courage that I can become one!! Happy B'day @iamsrk Sir Love you Sir and Thank you for inspiring me and millions like me to pursue our Dreams. And Love you Maa thank you for supporting me and Giving me that Hope and courage that I could turn my Dream Our Dream into reality!!