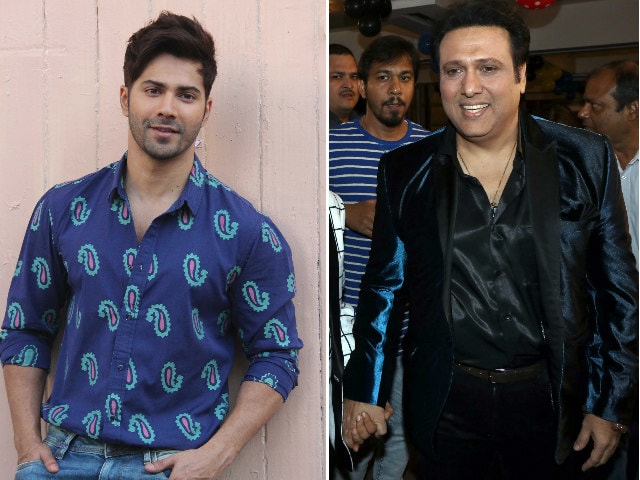 New Delhi: Actor Varun Dhawan was asked (again) to comment on senior star Govinda's disparaging remarks against his father David Dhawan. Speaking to mid-day, Varun declined to pass judgement, saying that he would not let his 'true feelings come out' and repeated that he was and will be a Govinda 'fanboy.' Together, David Dhawan and Govinda made 17 hit films in the Nineties, with names like Coolie No 1 and Haseena Maan Jayegi. Lately, the 53-year-old actor has spoken bitterly about his former friend and colleague, saying that Mr Dhawan abandoned him when times were rough and that he cast another actor in what would have been their 18th film.

Varun Dhawan, currently promoting his new film Badrinath Ki Dulhania, told mid-day, "This isn't really my place to talk. My father is currently in London, reccying for Judwaa 2, and he should respond to this. Govinda sir is years senior to me. I hold him in high regard. To each his own. I won't comment if he was wrong. I won't let my true feelings on the issue come out."

"(His comments) doesn't affect the fact that I like his work. I am a fanboy forever," Varun added.

Promoted
Listen to the latest songs, only on JioSaavn.com
Days ago, Govinda told mid-day, "He worked all his life with me and Salman (Khan), and delivered many hits. He may respect me as an actor, but not as friend. I stood by him when he was down and out, but he didn't do the same." He told news agency PTI, "When I asked David to make the 18th film with me, he took my subject and titled it Chashme Baddoor and cast Rishi Kapoor in it. Then I asked him to put me as a guest appearance. He didn't do that too."

Of Varun, 24 years his junior, Govinda told news agency IANS, "How can he be like me? To become Govinda, he needs to be innocent, uneducated and a poor village boy. Varun is already a son of a director. In the last six years, he hasn't done more than two films with his father, whereas I did 17 films with his father." Varun Dhawan's Badrinath Ki Dulhania, co-starring Alia Bhatt, opens on March 10. David Dhawan is directing him in Judwaa 2, a remake of his hit film which had starred Salman Khan. Govinda, last seen in supporting roles in films like Kill Dil, returns in new film Aa Gaya Hero - the title of which is self-explanatory.