Varun Dhawan, Natasha Dalal's Cocktail Party Was A Night To Remember. Inside Pics

A few photos from the couple's cocktail-sangeet party, held ahead of the wedding in Alibaug's The Mansion House, have been shared by fan-clubs 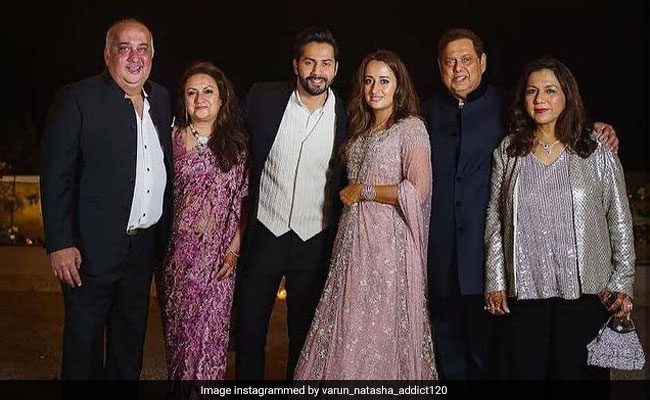 Varun Dhawan and Natasha Dalal's wedding festivities in Alibaug have wrapped but the Internet is still at work, digging out inside photos from the events. Varun and Natasha followed a strict no-phone policy at their wedding as they wanted to avoid photos getting leaked. However, once wedding was over, and Varun shared the first pics, social media was flooded with glimpses from the festivities, posted by Varun and Natasha's wedding guests. A few photos from the couple's cocktail-sangeet party, held ahead of the wedding in Alibaug's The Mansion House, have been shared by fan-clubs. Varun and Natasha can be seen posing with their families in the photos - Varun was dashing in a tuxedo while Natasha matched up to him in a pale pink lehenga.

Here's how much fun the Varun and Natasha had at the cocktail party:

Here's a glimpse of Natasha with her girlfriends:

Varun Dhawan's niece Anjini Dhawan was quite the diva at the cocktail party, in a shimmering gold ensemble.

Varun Dhawan and Natasha Dalal's wedding functions also included haldi, mehendi and sangeet ceremonies. Karan Johar, Shashank Khaitan, Kunal Kohli and designer Manish Malhotra were among the handful of celebs who made it to the guest list of 40-50 names. The newlyweds will reportedly host a reception in Mumbai sometime in February.