ICYMI: Anjini Dhawan Was Quite The Diva At Varun Dhawan, Natasha Dalal's Wedding

Anjini Dhawan carefully avoided posting glimpses of Natasha and Varun's wedding but couldn't resist sharing her looks for the events. 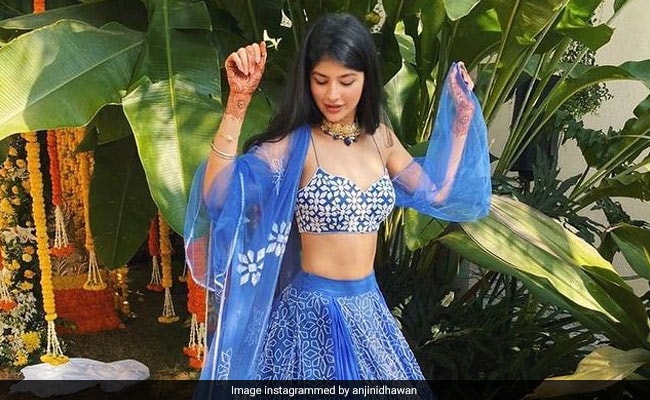 At Varun Dhawan and Natasha Dalal's wedding, some of spotlight must have been on Anjini Dhawan. She's Varun Dhawan's niece - the granddaughter of Varun Dhawan's uncle Anil Dhawan. Varun and Natasha followed a strict no-phone policy at their wedding in order to avoid photos getting leaked. Hence, Anjini Dhawan carefully avoided posting glimpses of Natasha and Varun's wedding but couldn't resist sharing her looks for the events. Varun and Natasha's wedding festivities included haldi, mehendi, sangeet ceremonies and also a cocktail party, all of which Anjini Dhawan had a blast at. Anjini's shaadi-special wardrobe was studded with designer ensembles, ranging from Shantanu and Nikhil to Manish Malhotra.

For the day functions, Anjini opted for stunning lehengas in blue and white and also ivory and gold. Looks like she had quite a photoshoot of her own. For the cocktail party, Anjini opted for a dramatic dress in pale gold, courtesy designer Ambika Lal. For the main day, Anjini turned heads in a purple velvet lehenga-choli combo from the studios of Manish Malhotra.

Anjini Dhawan Instagrammed some photos while her stylist shared the outfit details:

The bride and the groom also opted for designer Manish Malhotra for their wedding trousseau - Varun in an ivory embellished sherwani styled with a blue dupatta and Natasha in a breathtaking wedding lehenga.

On January 22, Anjini Dhawan was spotted at the Gateway Of India, leaving for Alibaug with her family members, to attend Varun Dhawan's wedding. Karan Johar, Shashank Khaitan, Kunal Kohli and designer Manish Malhotra were among the handful of celebs who made it to the guest list of 40-50 names.