After Wedding To Natasha Dalal, What Varun Dhawan Tweeted About "The Last Few Days..."

"...Just wanted to thank everyone from the bottom of my heart," Varun Dhawan tweeted 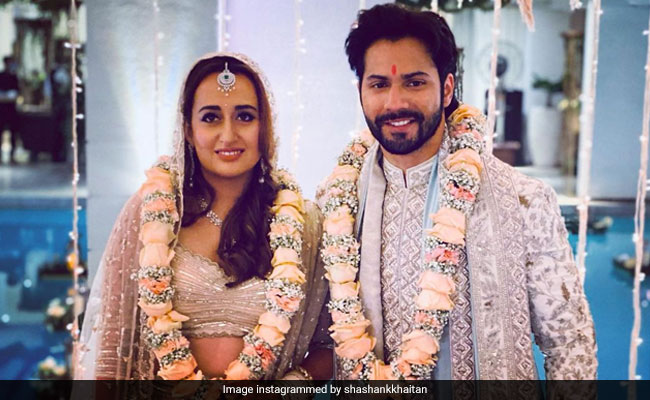 Varun Dhawan's wedding to Natasha Dalal turned into a social media phenomenon with the couple being showered with an overwhelming amount of love from their celebrity fans and fans alike. #VarunDhawan and #NatashaDalal, along with other wedding hashtags, trended for days, as fans waited to catch glimpses of Varun and Natasha's strictly private wedding. Just days after Varun Dhawan's wedding festivities wrapped in Alibaug, the 33-year-old actor checked into Twitter to dedicate a thank you note to his well-wishers. "The last few days, me and Natasha have received so much love and positivity from everyone. So just wanted to thank everyone from the bottom of my heart," tweeted Varun Dhawan.

Varun Dhawan, who just got married, summed up the "last few days" in this tweet:

Varun Dhawan also gave a shout out to the wedding planners for putting together a magical wedding:

Thank you for making this happen @shaadisquadpic.twitter.com/odyyRF0B95

Soon after, the couple stepped out for a photo-op when Varun asked the paparazzi to go easy on Natasha Dalal. "Aaram se! Darr jaegi who," Varun said. Varun and Natasha, who is now a designer, went to school together and are childhood sweethearts.

On Varun and Natasha's wedding day, congratulatory messages poured in from the likes of Deepika Padukone, Anushka Sharma, Katrina Kaif, Parineeti Chopra, Shraddha Kapoor, Alia Bhatt and others. Special posts arrived from Shashank Khaitan and Karan Johar, who were among the handful celebrity guests at Varun and Natasha's Alibaug wedding.