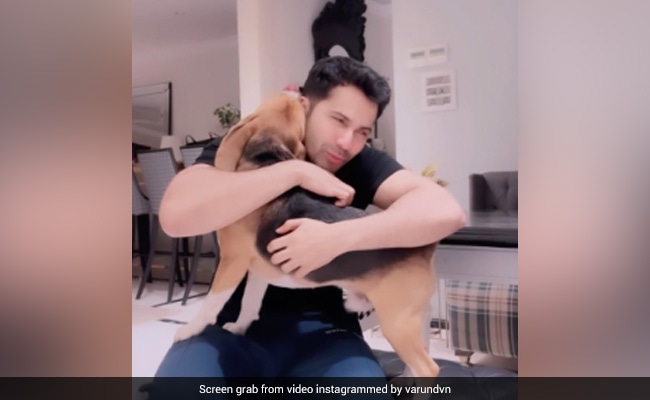 Varun Dhawan has been quite busy lately. After the promotions of JugJugg Jeeyo, Varun jumped straight on to the sets of Bawaal. Now after wrapping up Bawaal with Janhvi Kapoor, the actor has returned home after 45 days. And there is no one happier to have him back home than his pet dog, Joey. For this, we have proof. The actor has shared a clip on Instagram in which Joey is seen jumping and licking Varun's face in sheer excitement. Along with the clip, Varun wrote, “Back home after 45 days and couldn't be happier to see my boy, Joey. The last 3 months I have had literally no time to spend or explain to Joey why I was busy promoting JJJ and wrapping Bawaal; this has to be the greatest reward.”

Actress Esha Gupta spoke for all of us when she replied saying, “Awwlee” with a heart emoticon. Filmmaker Zoya Akhtar and actress Diana Penty also dropped heart emojis, in the comment section.  Have a look:

Actor Varun Dhawan loves dogs. Even during his time in Europe for Bawaal, the actor was seen playing with dogs. Sharing his picture dump titled “Summer Of Bawaal”, Varun wrote among other things, “In between work I've been exploring, observing and sometimes meeting up with European dogs - part 1.”

In Bawaal, Varun Dhawan will be seen with Janhvi Kapoor. He will also be seen in Bhediya alongside Kriti Sanon.