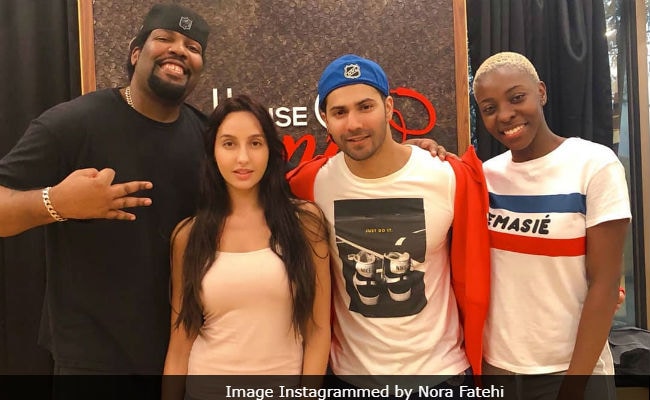 Nora Fatehi shared this image from the sets of the film. (Image courtesy: norafatehi)

Varun Dhawan and Nora Fatehi gave a sneak peek of their preparatory session from their upcoming dance film by sharing pictures on their respective Instagram profiles. On Friday, Nora shared a picture of herself along with her co-star Varun Dhawan and international choreographers Tania Torao and Tashan Muir, who are training them for the dance sequences in the film. In the photograph, Nora can be seen dressed in a white tank top and a pair of blue denims and Varun can be seen sporting a t-shirt of the same colour. Nora captioned the post: "Squad goals" and accompanied it with the hashtag "#3iscoming." Nora's post received over 1 lakh likes within a few hours on Instagram.

Meanwhile, film's lead actor Varun Dhawan also posted a photograph from the film's preparatory session on his Instagram profile. In the picture, the Kalank actor could be seen posing along with choreographer Sushant Khatri. "Nation of domination. Keep working through the pain," read the caption on Varun's post and he added the hashtag "#3prep." Varun's post garnered over 4 lakh likes on Instagram within a few hours.

The film went on floors in Amritsar last week. Film's producer Bhushan Kumar shared pictures from the sets of the film on his Twitter account and he wrote: "So it begins! First day, first shot of India's biggest dance film in Punjab. Wishing my best to the team. Break a leg!"

The film will be directed by Remo D'Souza and it also stars Shraddha Kapoor in a pivotal role. Earlier, Katrina Kaif was cast in the lead role. However, the actress walked out of the project because the film's schedule clashed with Ali Abbas Zafar's Bharat, co-starring Salman Khan.

The film will be Varun Dhawan and Shraddha Kapoor's second collaborative project with Remo D'Souza. The duo have earlier worked with the Race 3 director in the 2015 film ABCD 2.