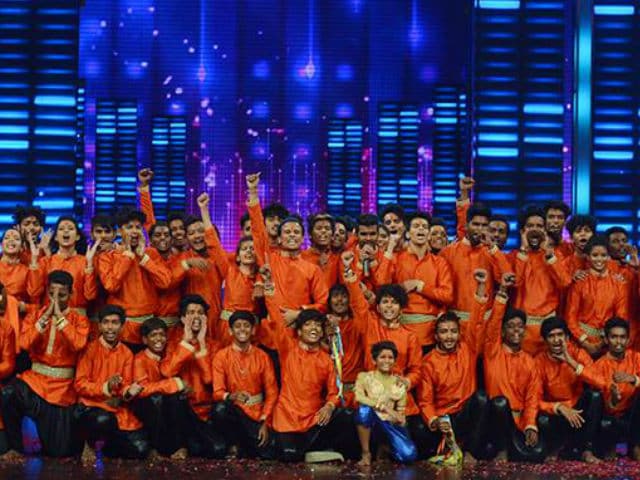 This image was posted on Facebook by Star Plus

With choreographer-filmmaker Remo D'souza as their 'superjudge' and under the guidance of 'captain' Dharmesh Yelande, 'V company' took home Rs 25,00,000 and a Maruti Suzuki Swift car.

"From now on, this group of 50 will embark on a new dancing journey that will surely take them places. I would like to thank all the audiences for voting and making the show a huge success," Remo said as he congratulated the group on their victory.

The show, which also featured Shakti Mohan and Sumeet Nagdev as 'captains', commenced with power packed performances by Remo, Dharmesh and Sumeet followed by performances by finalists - 'question mark crew', Hardik Rawat and Poppin Ticko along with 'V company'. (Also Read: Remo D'Souza Injured on the Sets of Dance +)

Dance took the initiative of showcasing every finalist's journey to the final stage.With the parents of each of the contestant present at the event, they gave their useful insights into the hard work they put in to reach the final stage.

Some "did not eat so that they could practice more" and some mothers who were indeed full of pride that their children had reached the final stage could not help their tears.

To add more fun to the ongoing competition, Dharmesh, Shakti and Sumeet gave mock auditions, recreating the time when they themselves were contestants before judging and 'captaincy' came their way.Shakti and Raghav (also the host of the show), gave a much awaited performance on Dheere Dheere Se and Gulaabo from the upcoming film Shaandaar. Remo had choreographed and designed the acts of the finale and also shook a leg with the captains to encourage the contestants.

Joining the celebrations to motivate the contestants were choreographers Terence Lewis and Geeta Kapur. Remo also announced the second season of Dance +.